Trees to make you happy: The Tanzlinde of Schenklengsfeld, Germany's oldest tree

I truly hope that the followers of this series of blogs enjoy pleached trees as much as I do. After three very special pleached trees, it is high time to present you the Tanzlinde of Schenklengsfeld. Planted in 760, this tree will turn 1260 years old in 2020 and it is probably the oldest tree in Germany. I would even dare to say that this is the oldest Tanzlinde in the world! How has this tree managed to survive witnessing the recurrent pandemics pass by? The plague broke out when the tree was 540 years old; smallpox at 760; cholera came at 1057, and Spanish flu at 1158 years of age. And now that the Tanzlinde is 1260 years old, it is witnessing the coronavirus outbreak. For the sake of clarity, none of them are tree diseases but human diseases of which the plague alone caused 100 million deaths. Still, in 2018, the Tanzlinde of Schenklengsfeld also made it to the main headlines in the Netherlands because villagers had to water it in order to prevent the tree from drying out. Indeed, extreme drought might be a deadly “pest” for trees.

The Tanzlinde of Schenklengsfeld can be found in the municipality of Schenklengsfeld, district of Hersfeld-Roten, state of Hesse (Germany). The tree is located on a square in the center of the village. It is a large-leaved lime tree, Tilia platyphyllos. The crown is 25 meters wide and about 20 meters high, and so it fills almost the entire square with its crown. Despite or perhaps thanks to the support of beams, the crown has grown to a great extent and is no longer trimmed regularly like Effeltrich's Tanzlinde. A postcard from 1937 shows that the tree was much lower in height back then; it had an estimated height of 10 meters. According to this postcard and the sketch from 1895 that can be observed down below, it seems that the Tanzlinde was still pollarded in the past centuries. However, it is not clear to me how long the tree has been maintained following its particular tree care technique. In fact, pleached trees like Tanzlinde have been common in German tree care culture for a long time, but I am not certain of its use back in the 7th century. Somehow, during the course of last century it was decided to stop the pollarding and instead let the crown grow freely. We can now distinguish clearly the base of the crown, which is largely supported by oak beams, and the branches above, which grew later on since they appear underdeveloped. Despite those upper branches being underdeveloped and lighter than the others, they are still anchored with both steel cables and nylon lines (following the typical German tree care culture, of course).

“It is the wonderful village linden of Schenklengsfeld, almost the only one near Hersfeld, which is still 'walled and guided' as the Old Law demands, that has made it to our judgement day. ‘Walled and Guided’ - that is, a low wall defines the cross-shaped place that points to all directions of Heaven, and as far as the crown extends it creates the Holy Place, in which the Right is defended, the venerable basis of people's coexistence and cooperation. Strong posts stand on the wall and support the beams of the heavy, stunted branches of the strong Ancient Tree, such that the main branches, artfully intertwined with the beam structure, together with the dense branches and canopy, form a closed arbor, surrounded and protected against the weather, and yet, according to old Germanic custom, creating a Courtroom under God's naked sky. ”

The most peculiar part of the Tanzlinde of Schenklengsfeld is that the trunk is no longer present. You would expect a  gigantic bizarre irregular bended trunk for such an old tree, but instead the crown grows from four loose stems that developed independently. A sign at the tree explains that the original main trunk disappeared and that the current stems evolved from the shoots that emerged from the root flare. The current stems stand facing the four wind directions, and their total circumference is 19.3 meters. It could be that they originated from regular young shoots, but we should remember that a guided lime tree will likely segment after many centuries. Active roots are directly associated with leading branches that carry most of the leaves, and thus they tend to develop into independent units. Sinking trunk parts become less functional over time and they eventually die. Therefore, the most vigorous growing units detach from the central trunk and grow out in thickness to support the leading branches.  This process can also be observed in the 1000-year-old Tanzlinde of Effeltrich. It might be just a coincidence, but this could explain why the current stems evolved towards the cardinal points. If the leading branches are facing the wind directions, then so will be the resulting stems. Besides, The University of Götingen confirmed in 2009 that all four stems have the exact same origin, and thus there are no significant canopy growth differences among them. You can watch this self-explanatory video to get an idea on how the tree has grown. Just as a fun fact, it is nice to discover a central stone in between the current stems indicating the original planting year 760 of the Tanzlinde. Probably this stone was placed after the initial trunk completely decomposed. And last but not least, it is of course a beautiful tree in a lovely German setting.

I hope that during this corona times I managed to bring a bit of positivity with my series "Trees to make you happy". In the Netherlands we are slowing moving to the "new normal", which means that I also feel the need to include other tree topics in my blog. This does not mean that I will stop showing beautiful, impressive trees at a later stage. But for the next time, brace yourselves for diving into the barking on internet and perks of dealing with oak processionary moth. 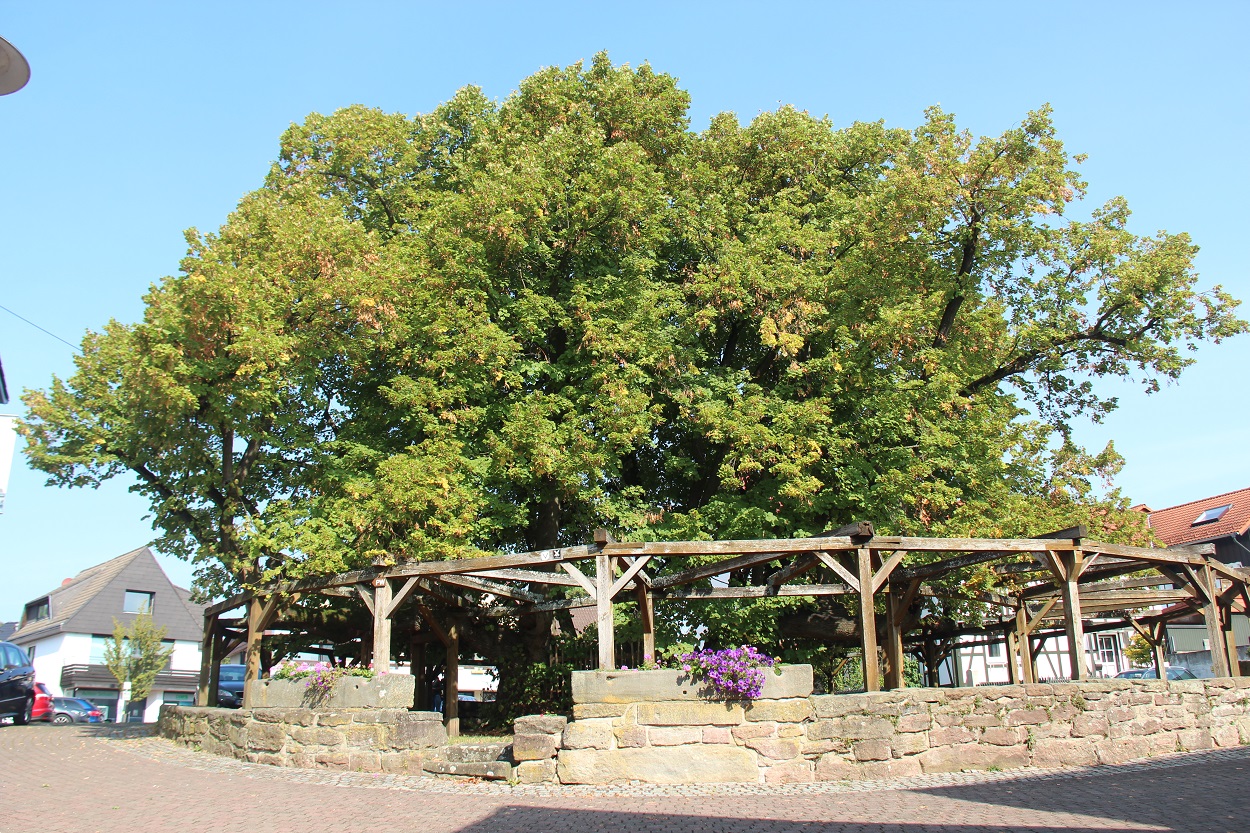 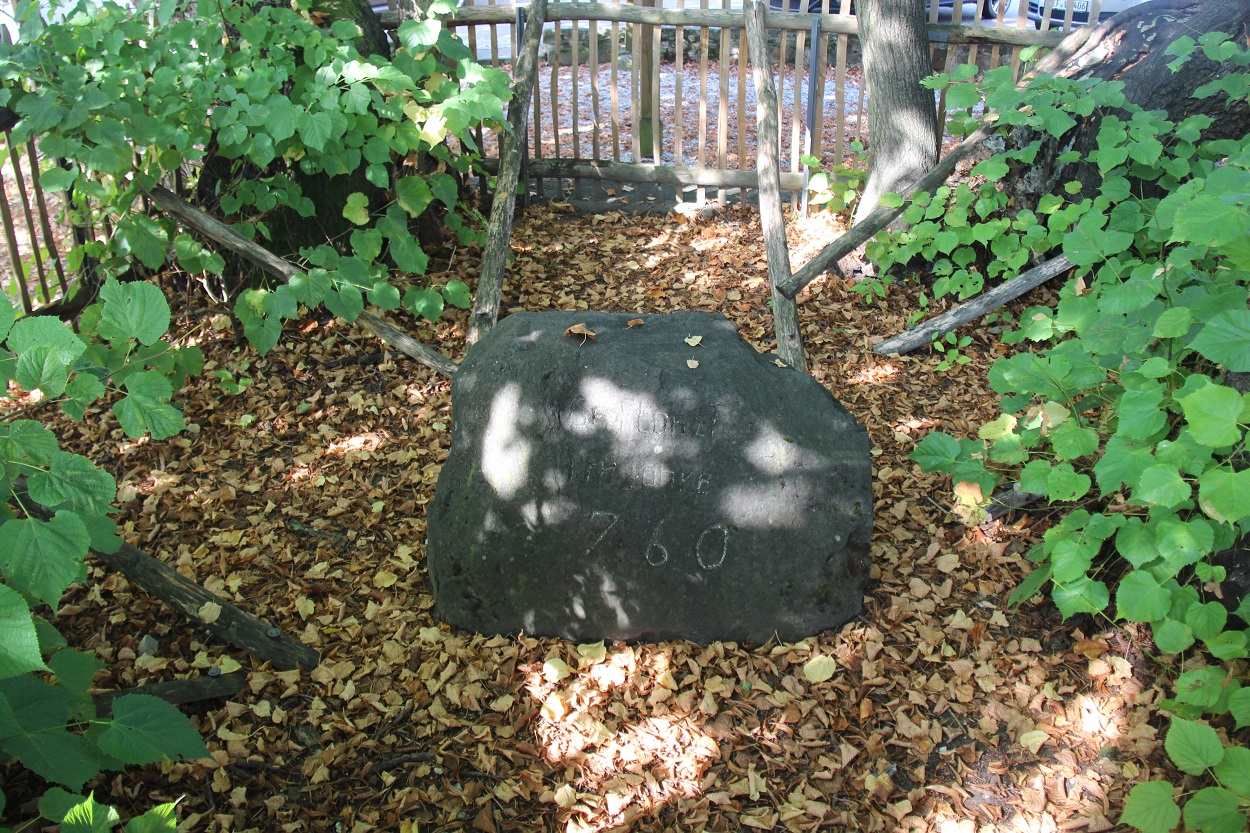 Stone with planting year at position of original stem 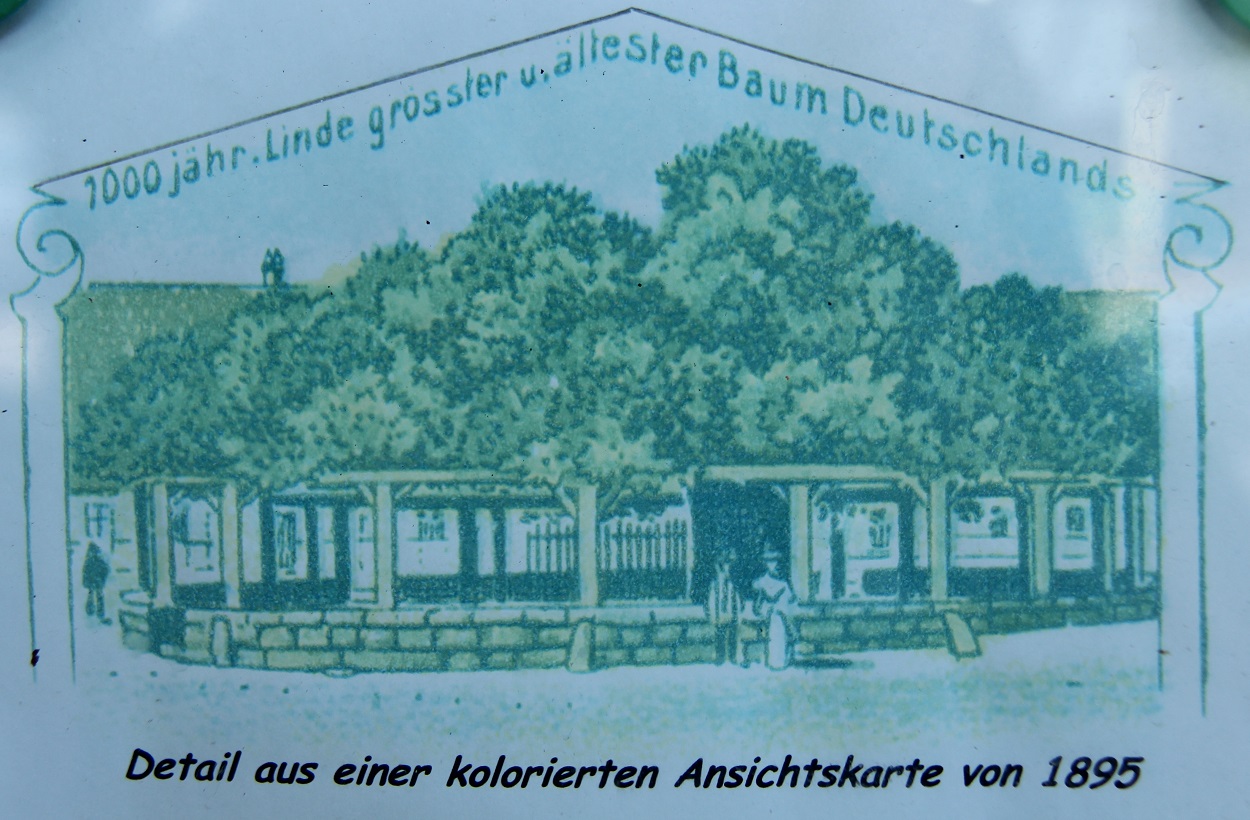 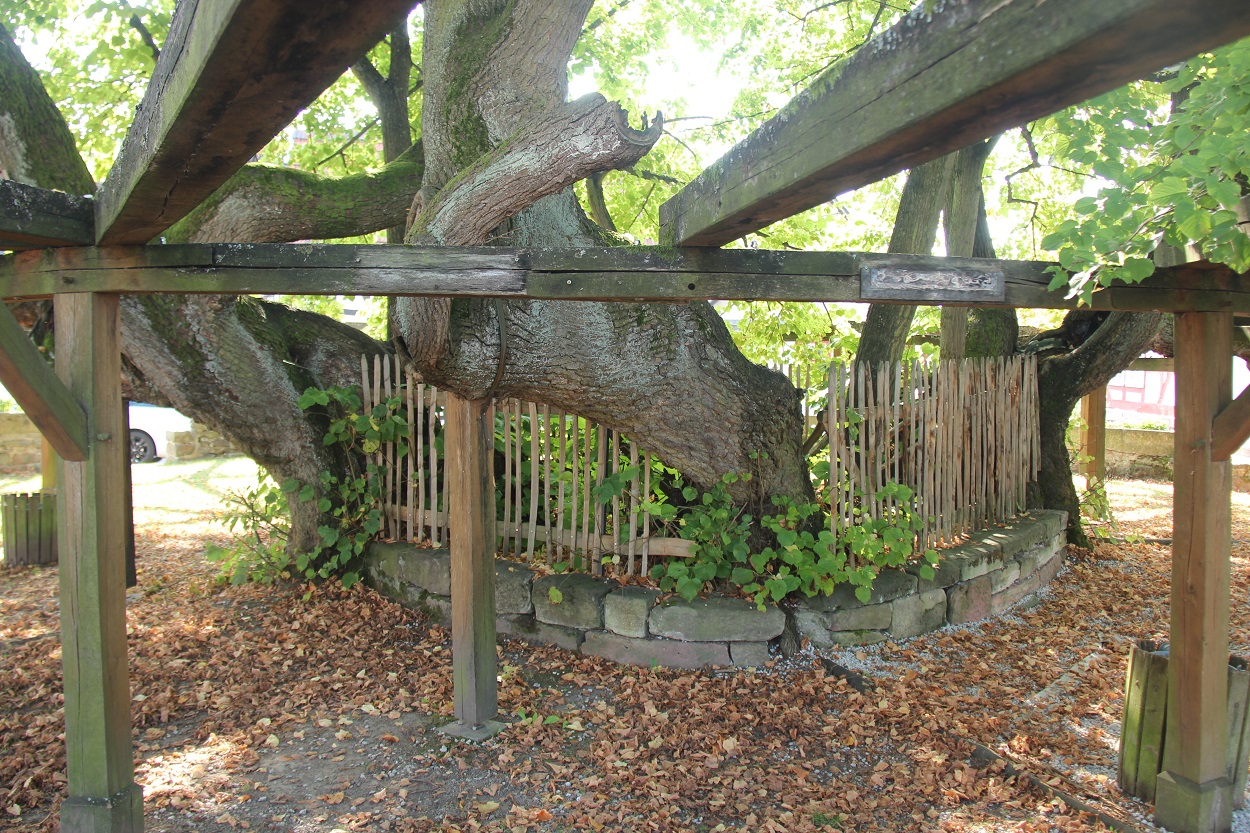 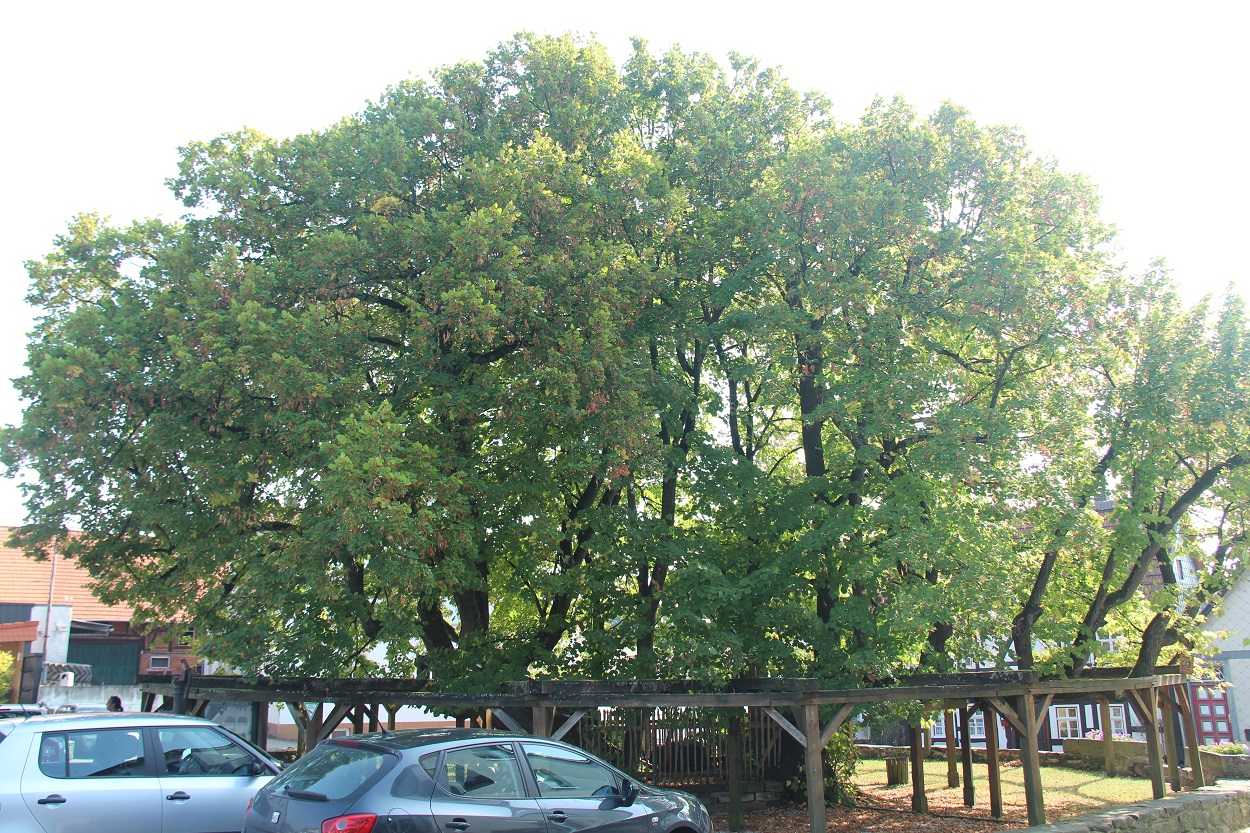 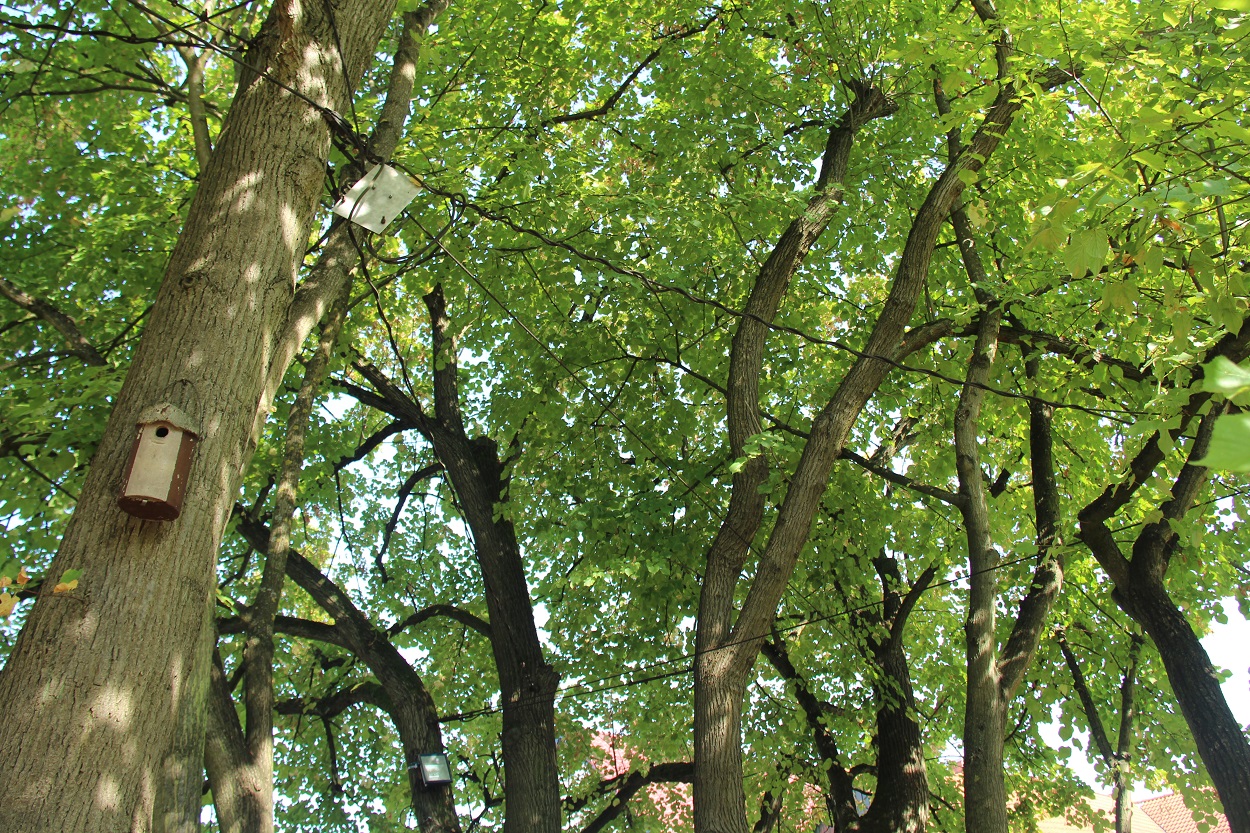 Lots of iron and nylon anchores