In my blog I usually reflect back on my working routine and on trendy tree-related topics. Given the current coronavirus crisis though, everything is relativized and it becomes difficult to identify what is actually going on in the tree world. I crave for positivism and intend to stay away from the disease psychosis. Therefore I now turn to the tree that has impressed me the most during the past years. Such tree stands in the name of cultural tradition and people’s respect for trees. I am indeed talking about the ultimate tree among the honours class of pleached trees: The Tanzlinde of Peesten (“The Dancing Linden of Peesten”), it is worth a visit!

My love for shaped trees has been apparent throughout my entire career, even though some may think that my true passion lies in tree pests and diseases. Shaped or pleached trees are the ultimate of how people can manage and control nature to their own preferences or benefits. Isn’t that nice and contradictory? I do have the above mentioned predilection; still, I am often critical about our inability to control nature. Overall, I am dazzled when different generations transfer the knowledge and art of shaping and maintaining shaped trees over time.

In Germany there are still dozens of tanzlinden which, in my opinion, belong to the honours class of pleached trees. They deviate from the arbour linden in the Netherlands or the floor linden in Belgium. Tanzlinden are shaped into buildings; you can even find the outstanding Lindenbaum museum in Neudrossenfeld (Bayern). The branches of tanzlinden are often directed outwards in several horizontal layers and grow around a wooden construction. The origin of such shape trees dates back to pre-Christian times. Back then tanzlinden were the centre of pagan tree worship and the traditional gathering point for villagers. This guided lime trees were found all over Germany, Alsace and Switzerland.

The Tanzlinde of Peesten is the finest among the tanzlinden. This tree is found in the hamlet of Peesten near Kasendorf, Kulmbach district, state of Bayern (Germany). Peesten has only 260 inhabitants, and as soon as you enter the village, you can immediately find the eccentric but impressive tree. It is a broad leaved lime tree, Tilia platyphyllos. Next to it, a sign written in 1657 states that a tanzlinde was planted there between 1550 and 1600. After surviving two world wars with a poor maintenance and the influence of different weather conditions, a weak remnant of the predecessor was removed in 1947. A new tree was planted in 1950, but unfortunately it died. The current tree was planted in 1951 with a circumference of about 40-50cm, as shown in an early stage photo from 1956. Since then, it developed enormously. The tree has been shaped into a square building with a dance floor in it, and almost the entire final shape, including the crown on the roof, is filled with its own branches and foliage. The tanzlinde has now reached an impressive trunk diameter of approximately one meter. This is quite peculiar for this relatively young tree. In fact, a 70 year old tree is still considered as an adolescent tree. Besides, a diameter of one meter is quite substantial for a lime tree that is regularly pruned, since it may limit its growth. In 2001, the wooden construction within the tree was restored to its original state incorporating 30 m³ of oak wood into it.

In honour of Peesten’s 7th anniversary, a rounded bench was placed around the loamy base of the trunk. Many visitors make use of it to take a rest and enjoy the great view of the surroundings. Twelve stone columns placed on a common base support the 3 meter high dance floor. The first layer of branches that act as a frame for the building extend under the dance floor in a perpendicular manner towards the trunk. As a consequence, the thickening of the branches is delayed. Since the tree is integrated into the building, the branches are not the load-bearing part of the construction. Instead, branches and foliage decorate the outside part of the structure. You can reach the dance floor through a historic stone-made spiral staircase dated back to 1837.

After ascending the 22 steps, the hall will leave you speachless: the dance floor has a total area of 87m²! A room of 9.5 x 9.5 meters may sound small to some people, but considering that you are stepping into a tree, this dance floor is impressively large. The trunk of the tanzlinde arises from the middle of the hall and it is surrounded by another bench. The constructed structure has 11 windows and the roof is formed by beams that shape the crown. The main branches rise quite stronghly through the open roof forming the top of the crown. The view from the windows is magnificent! Not only you can see the village, but you can also observe the valley to a great extent. The foliage of the linden grows around the windows and through the entire structure. In fact, many strings and ties have guided the growth of the branches against the structure. Apart from a tiny corner, most of the walls and roof have a beautifully arranged and evenly distributed green cover. The tree is pruned regularly by removing the thickest branches, but is it quite visible that it is not pollarded or trimmed annualy. Only the top shows some sort of compact formation due to the increased apical growth and the steep planting angle of the leading branches from the dance floor.

While I sit on the tanzlinde bench, I embrace the moment and uterly impressed I praise that for several centuries and multiple generations this tree has been maintained in such form in this particular place. The tree is now completely establised within the local culture. They take pictures on the stairs during special occasions, they celebrate weddings and beer parties are held in the dance floor every year. What an amazing experience to celebrate those things under the same tree. Whoever that dares to create such monument in our modern society will be successful for sure! 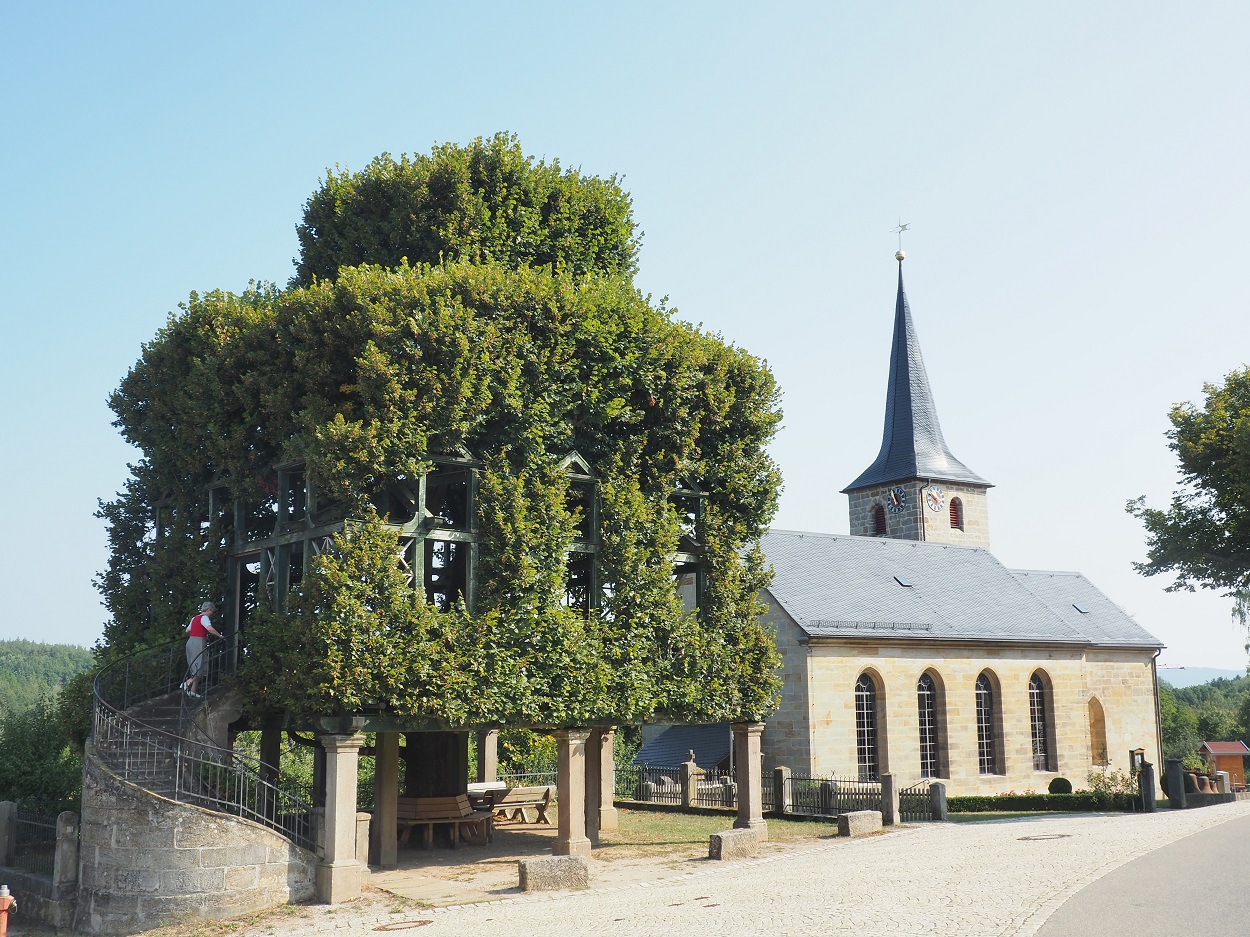 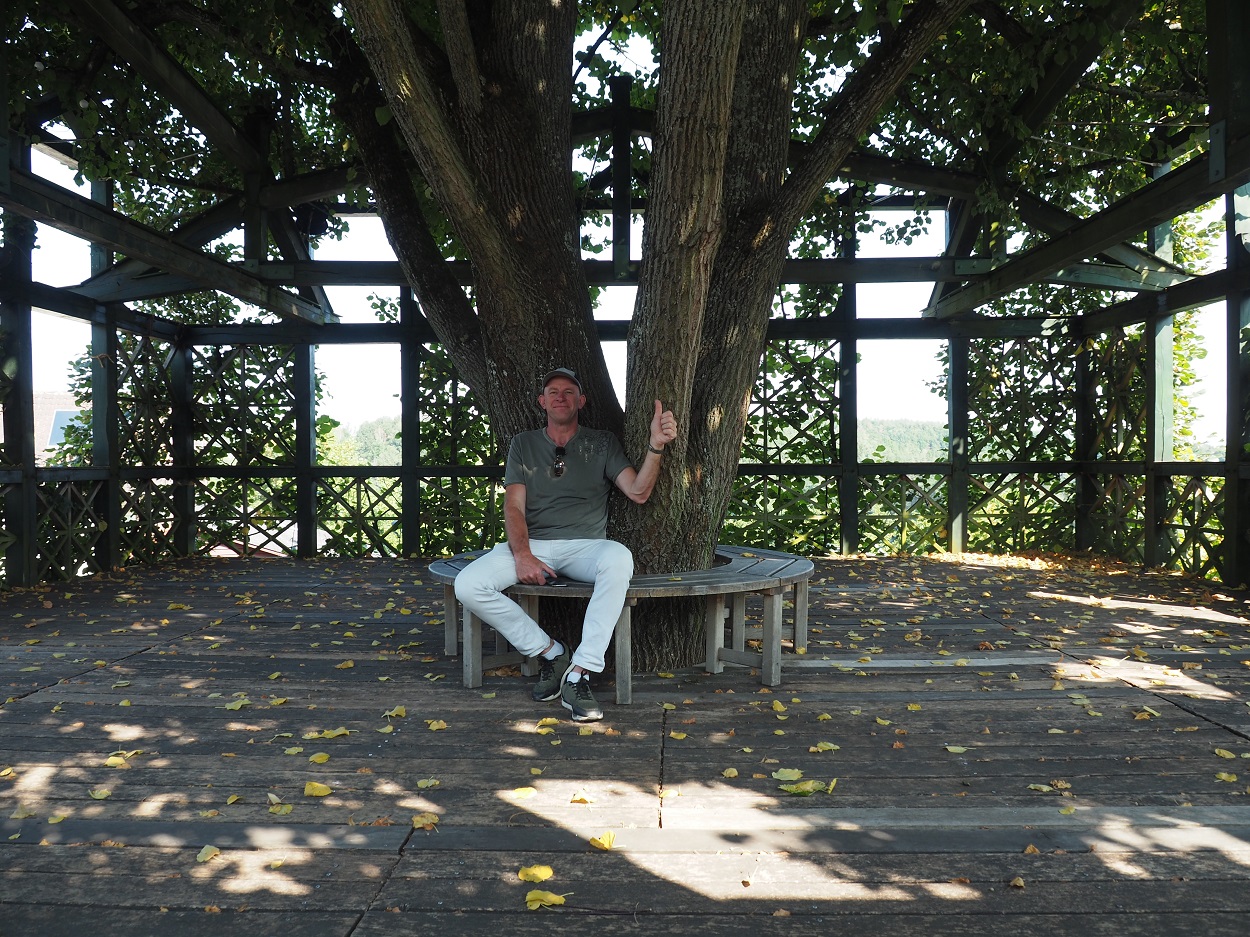 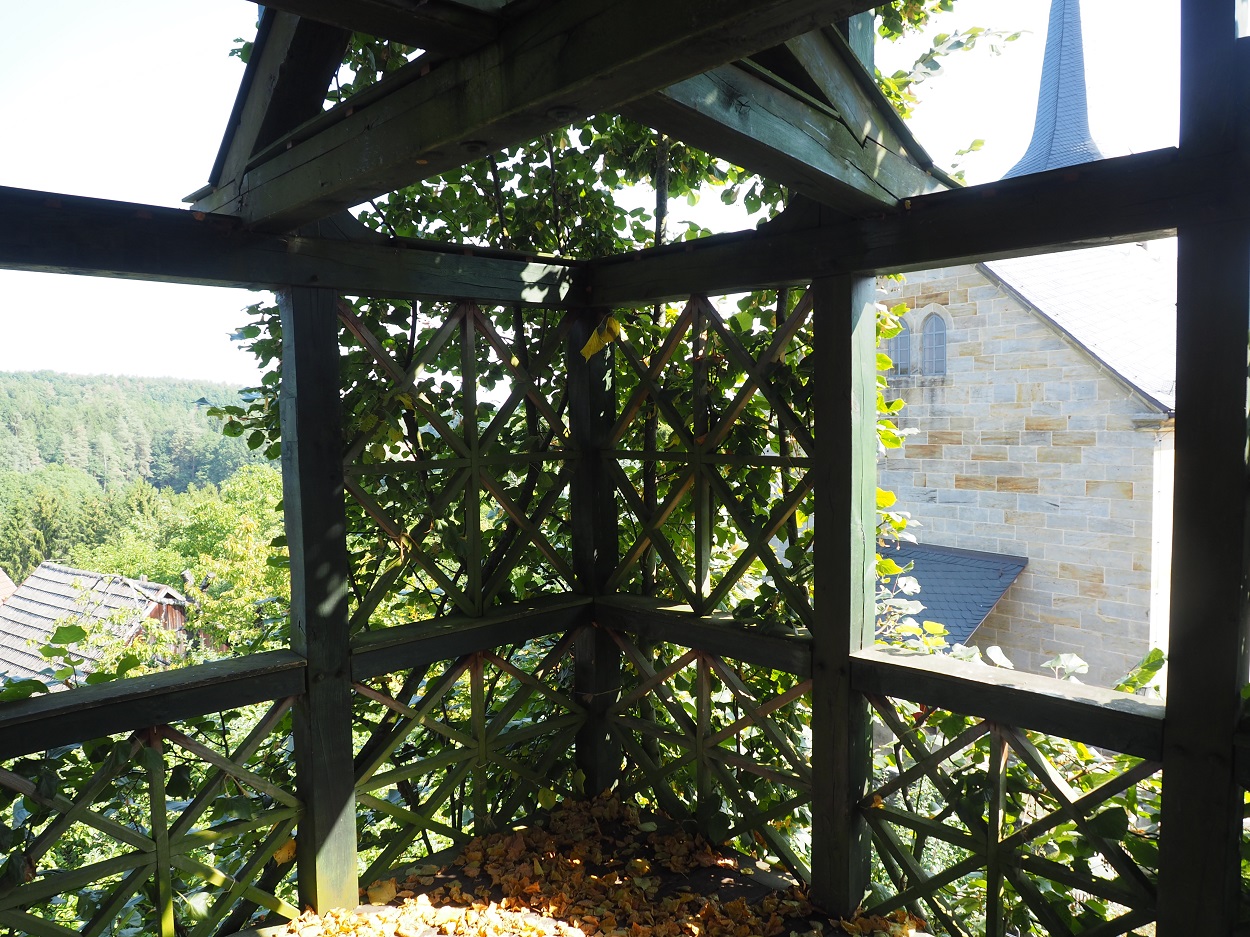 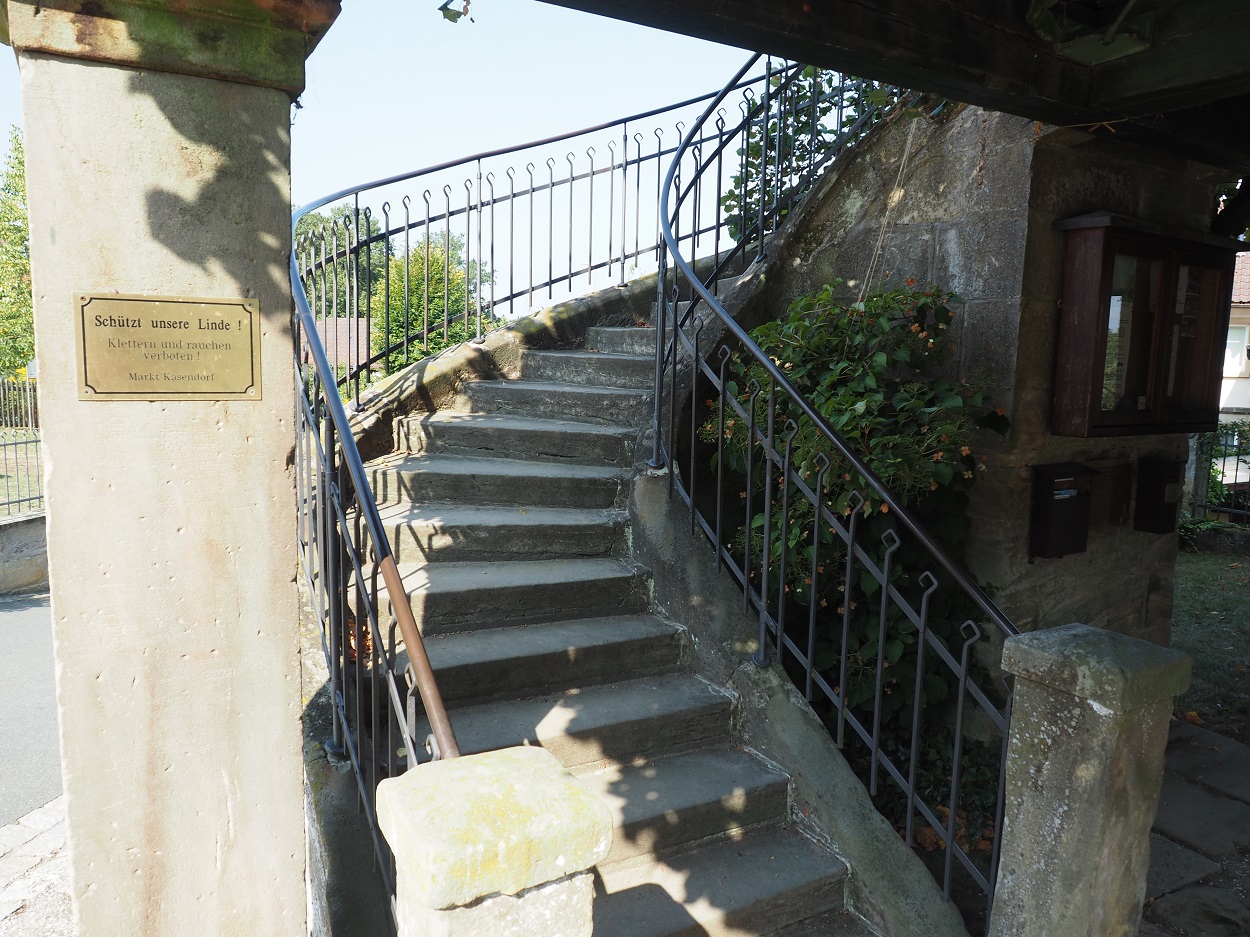 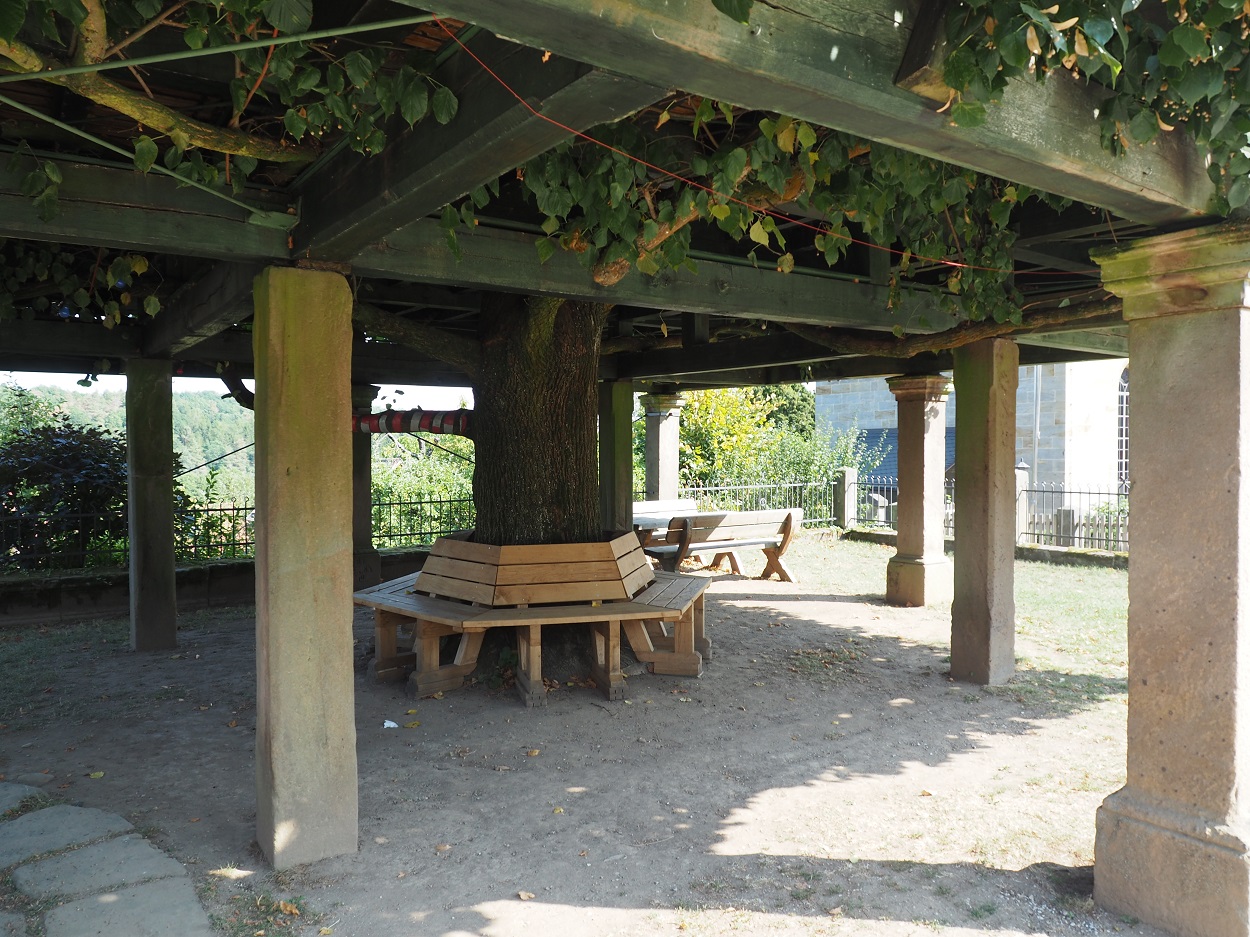 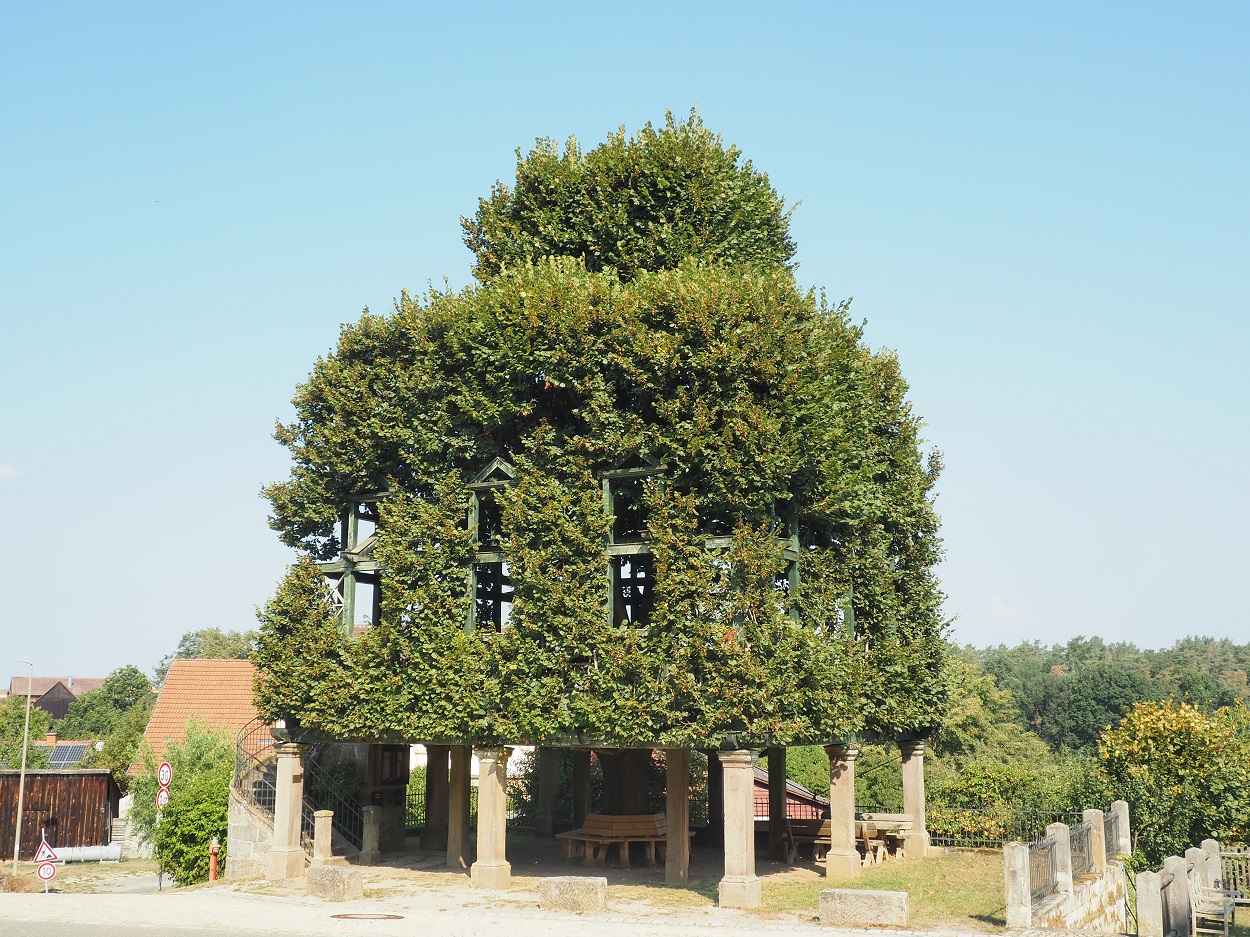