Trees to make you happy: Moeierboom of Etten-Leur voted as the Netherlands most beautiful tree!

The Moeierboom of Etten-Leur in the province Noord Brabant has recently been chosen as the true winner of the Tree of the Year contest in the Netherlands. This eminent shaped tree has been conserved  as a  etagelinden (floor lime) in the market square of Etten-Leur since 1675. Even visited by the famous Dutch painter Vincent van Gogh in 1881, this tree will compete in the 2021 European elections.

The name Moeierboom immediately evokes a certain degree of respect. Its name, in Brabant dialect, suggests that it is the mother of all trees. Nowadays the tree is about 345 years old, but that does not make it a mother of all trees.  However, when looking at the shape of the Moeierboom, we can easily say that it is a clear example of a protective tree, where you can safely take a shelter under and have the impression that the tree is watching over you. The Netherlands has no more than ten of these memorable remnants of historical shaped trees.

Lately, I have been “collecting” as many shape and floor limes as possible in Western Europe. So far I have visited dozens of these trees in the Netherlands, Germany and Belgium. In some of my previous blogs you can find the most impressive cultural forms, such as the Stufenlinde of Grettstadt and the Etagelinde of Macon. I am convinced that many more will follow.

The Moeierboom is a large-leaved lime (Tilia platyphyllos) that has been pruned into one floor or arbor shape for centuries. The structural branches are supported at a height of approximately 275 cm by an iron frame with beautifully maintained cast iron elements on the connecting pieces. The upright branches of the middle part are pollarded at about 3 meters above the horizontal structural branches. At the edge of the canopy, the upright branches are pollarded somewhat lower, which means that the top of the crown has a round shape. The crown shape exactly matches the etagelinde of Oisterwijk, which I already described in one of my previous blogs ## BLOG ##.

I deduced that the tree has been annually pollarded for many years. This can also be seen in one of the photos that I took in 1990.  This type of maintenance can easily result in an increasing wood volume in the pollarding tips. During my visits to this tree I noticed that the annual shoots are deeply cut, but not always at a consistent manner. Hence we have a problem. If you leave 1 cm at the base of a shoot every year, you will end up pollarding 10 cm higher after 10 years. You can imagine that after a decade of a not completely consistent pruning, wood clumps will develop at the tips of the often fragile branches. This branches will eventually break out because they cannot uphold the difference in thickness. Once I described this phenomenon as knuckleheads. In trees where no clump formation is observed, shoots were consistently cut smoothly.

Alternate pruning is also regularly used. In this case alternating pruning frequencies are applied. Not everything is pruned every year, but intervals of 2 to 3 years are considered.  Another option is to make a selection of shoots to be pruned and maintain part of the two to three-year old shoots that are then removed during the next pruning round. This technique may produce a messy crown image, but it allows a considerable shoot growth which is sometimes necessary to increase the regenerative capacity of the tree. For instance, the small shoots of the Moeierboom are retained each year, causing a positive effect on the shoot growth during the spring. This tree is still growing vigorously despite its age. According to some measurements carried out in 2019, the trunk is still stable but limited in diameter growth (206 cm). This is a consequence of centuries of consistent pruning.

As to the age of the tree, I rely on the available internet information, my own experience and the actual data on the spot. On one side of the tree it says: "Vincent van Gogh daily visited this natural monument from 1675 onwards", but on the other side of the tree here is a stone with 1774 on it! The Brabant Historical Information Center states that this last date is incorrect. Anyhow, it is difficult to judge whether the tree is 246 or 345 years old. Given the limited girth, I lean more towards the age of 246 years. In fact, with a trunk circumference of 206 cm, the average girth growth per year is only 0.8 cm. If we consider that the tree is 345 years old, the average girth growth per years drops to 0.6 cm. This results in an average annual ring of 1 mm, which is quite little.  However, this might be still possible, especially considering that the crown volume of the  tree is constantly limited.

I regularly notice that in Brabant we are quite chauvinistic about Vincent van Gogh. Everytime when a bed is noticed where he could have slept on we have a new selfpredicate Vincent van Gogh town. Nuenen, for example, claims a strong affinity with Vincent van Gogh and they also have, coincidentally, a etagelinde. A good inspiration to start a new blog about this tree indeed. But the same discussion also applies to Etten-Leur. A sign by the tree proudly states that this world famous painter walked past this tree every day after he had settled in Leur in 1881. When I let this affect me, I get even more impressed by the Moeierboom. When Vincent van Gogh was in Etten-Leur to eventually visit this tree, the Moeierboom was already at least 107 if not 216 years old. Vincent was still striving to make a decent living and this tree was already there. It must have had exactly the same crown shape back then. The only thing that would have been different is the surrounding environment. Vincent van Gogh died in 1890 and nowadays there are few people on earth who can afford his artwork. But the tree has always remained the same. This is also evident from the time period that I have known the tree. In 1990 I visited it for the first time, and the tree was still in a highly paved environment with the provincial road rushing past the square. These days justice has been done and the Moeierboom is located in a much more intimate and prominent location but still holding the exact same crown shape.

In Europe, we have been choosing the Tree of the Year for a decade. In the past three years, the Stichting Beheer Natuur en Landelijk Gebied (the Nature and Rural Areas Management Foundation) and the SBNL Natuurfonds (SBNL Nature Funds) have organized the Dutch election of the Tree of the Year. These elections are highly welcomed since they bring awareness on the beauty and splendor of trees to the attention of a wider audience. Trees can be so impressive, timeless and infinitely beautiful that we can hold an endless Tree of the Year contest and still find multiple trees that may be suitable for the award and thus difficult to choose a single one. In 2020, the Guardian of the Flooded Village, a 350 year old Scots pine in the Czech Republic has been chosen as the most beautiful tree in Europe. In 2019, De Bladelse heksenboom Zwarte Kaat from province Noord Brabant was elected as the Dutch Tree of the Year. The year before that another Noord Brabant tree was honored with the title. In my opinion this is just a funny coincidence, since I know trees in every Dutch province that can potentially become Dutch Tree of the Year.

The Moeierboom of Etten-Leur is a mighty tree. Mighty by the respect that many generations have given to it through preservation. It is our duty to continue with such practice with the same respect and to transmit this relic to our children. 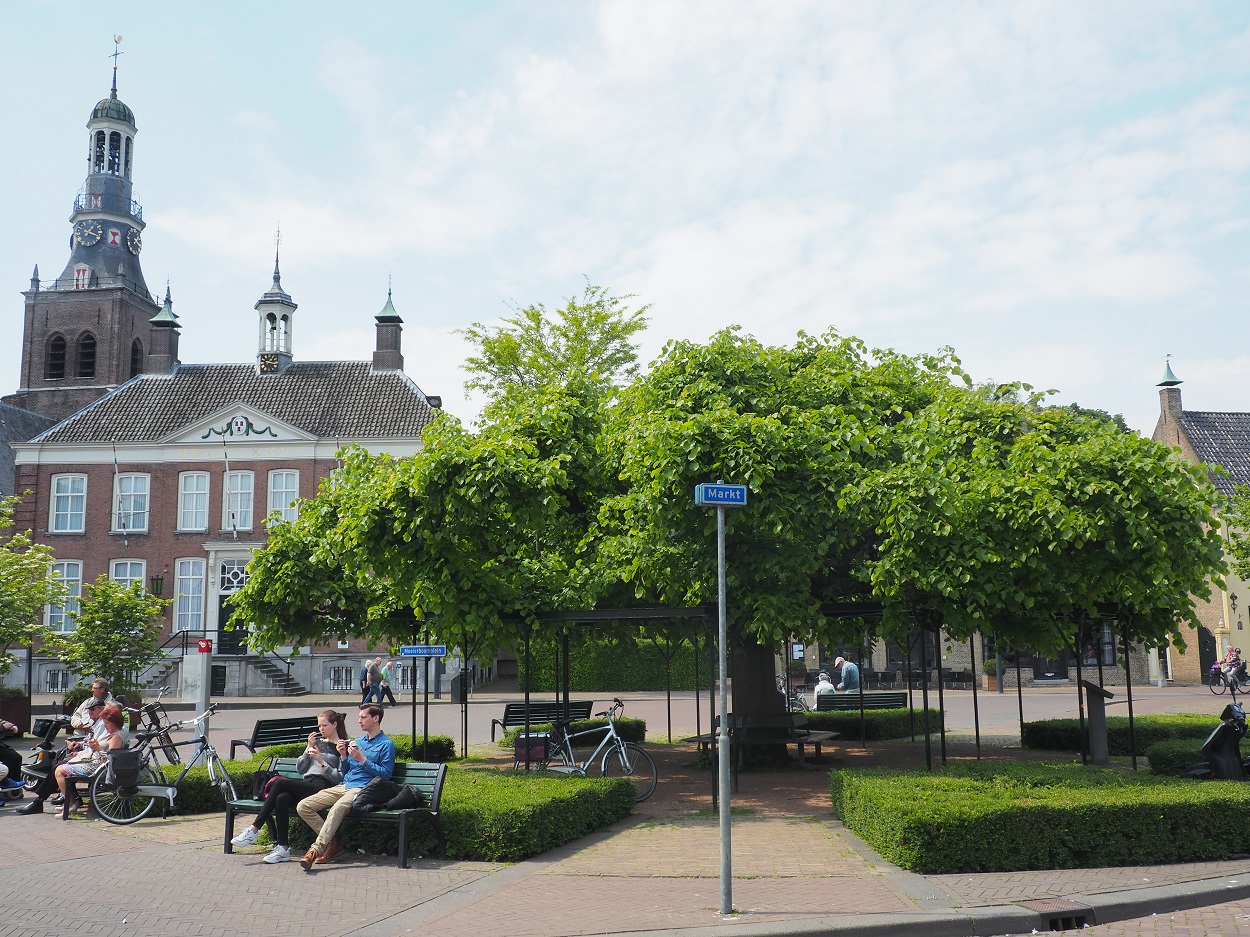 Moeierboom May 2019, with prominent integration in environment 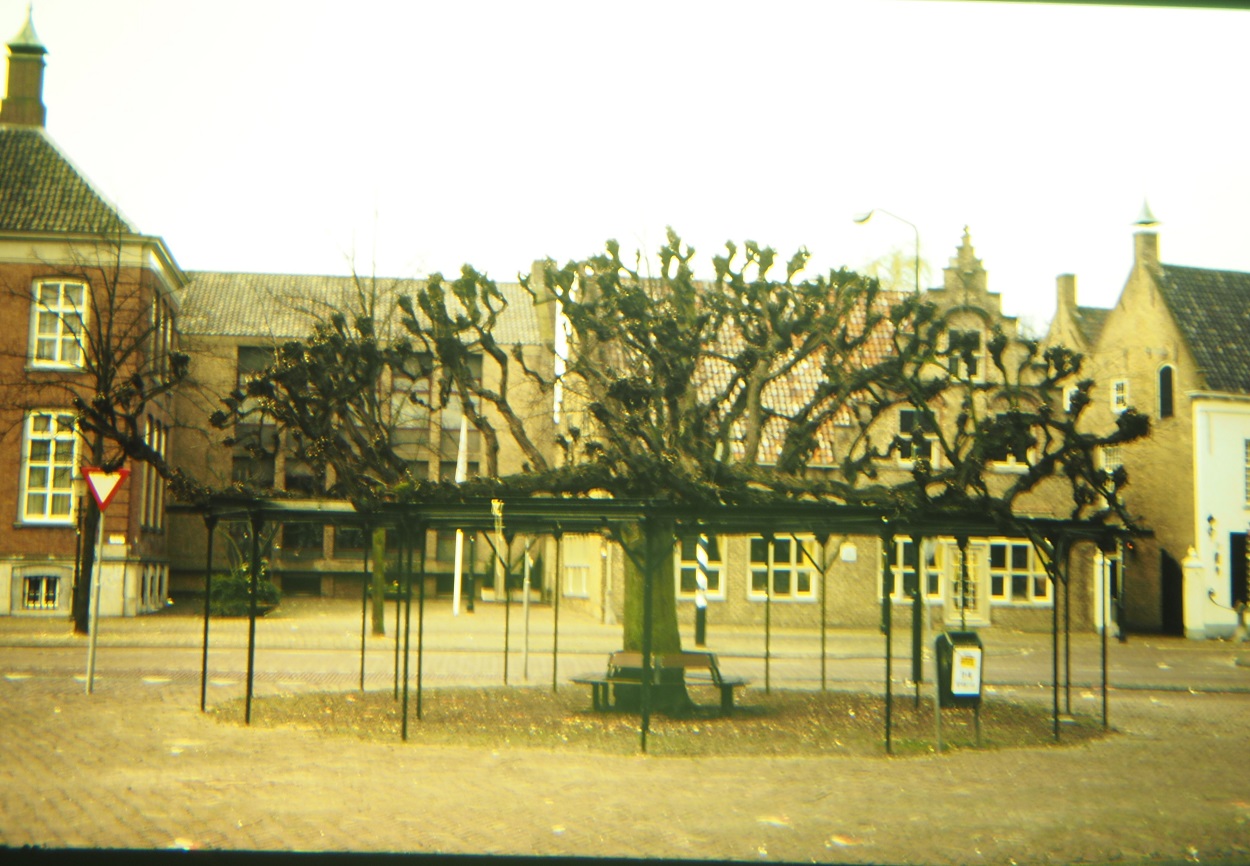 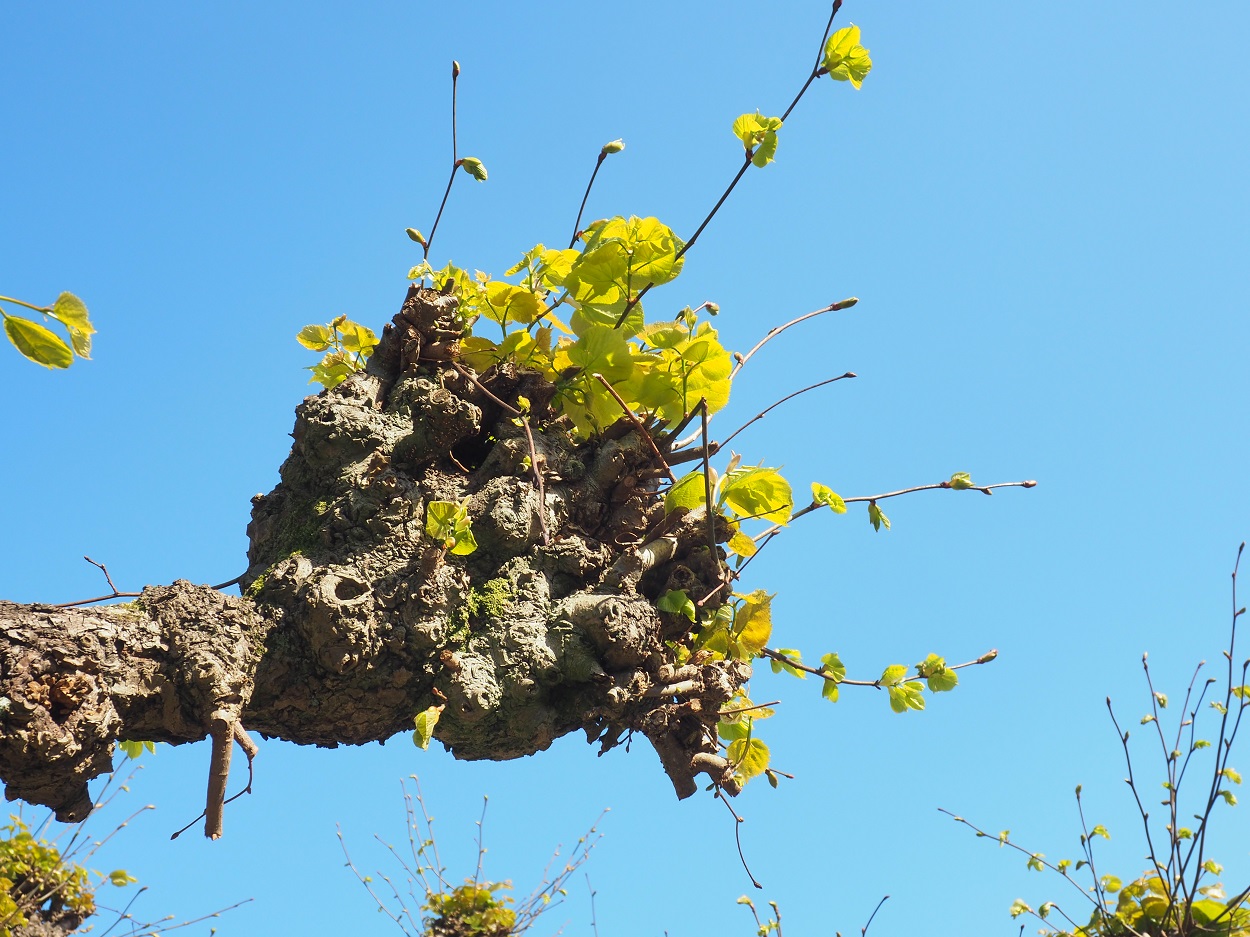 Knucklehead at tip of fragile branche 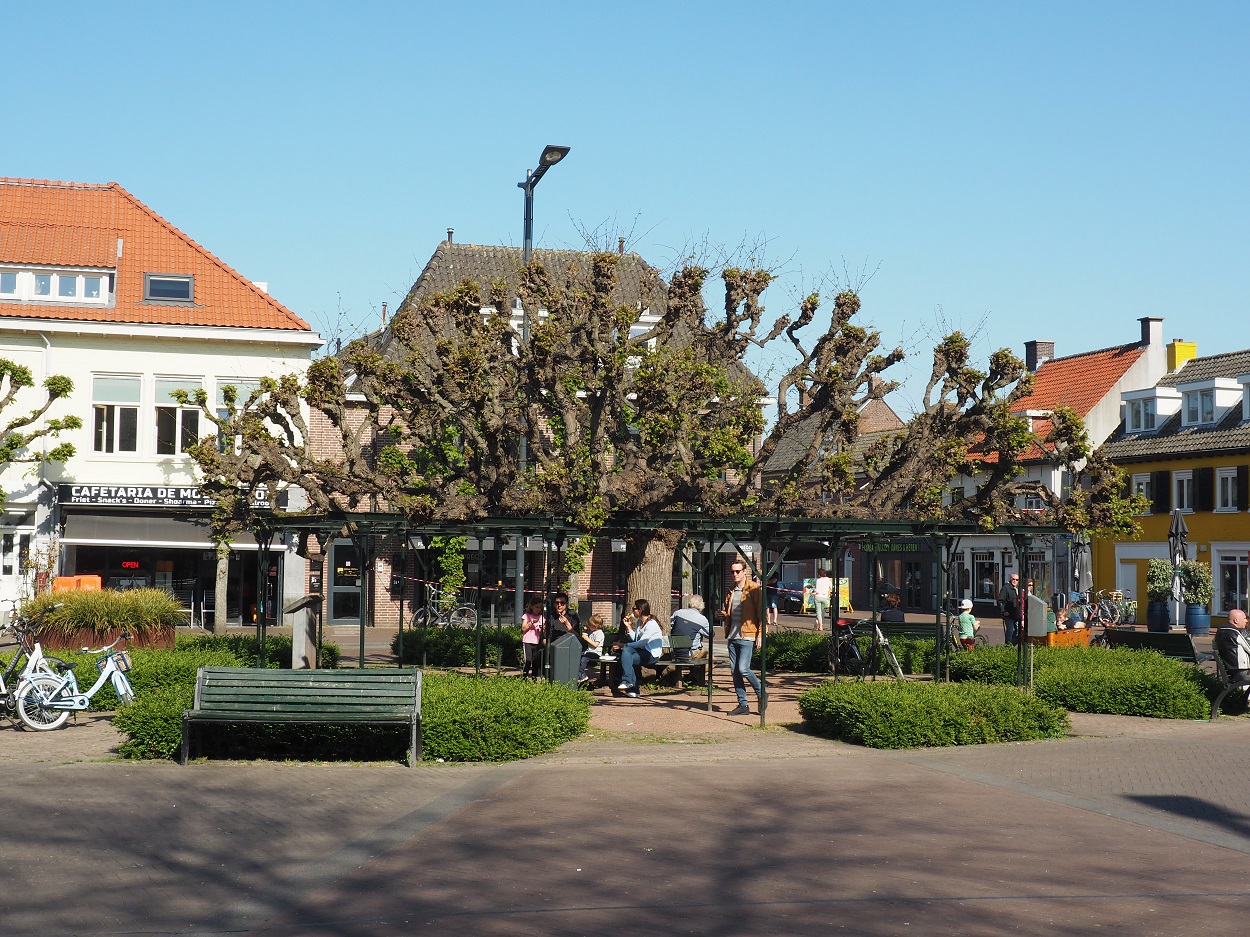 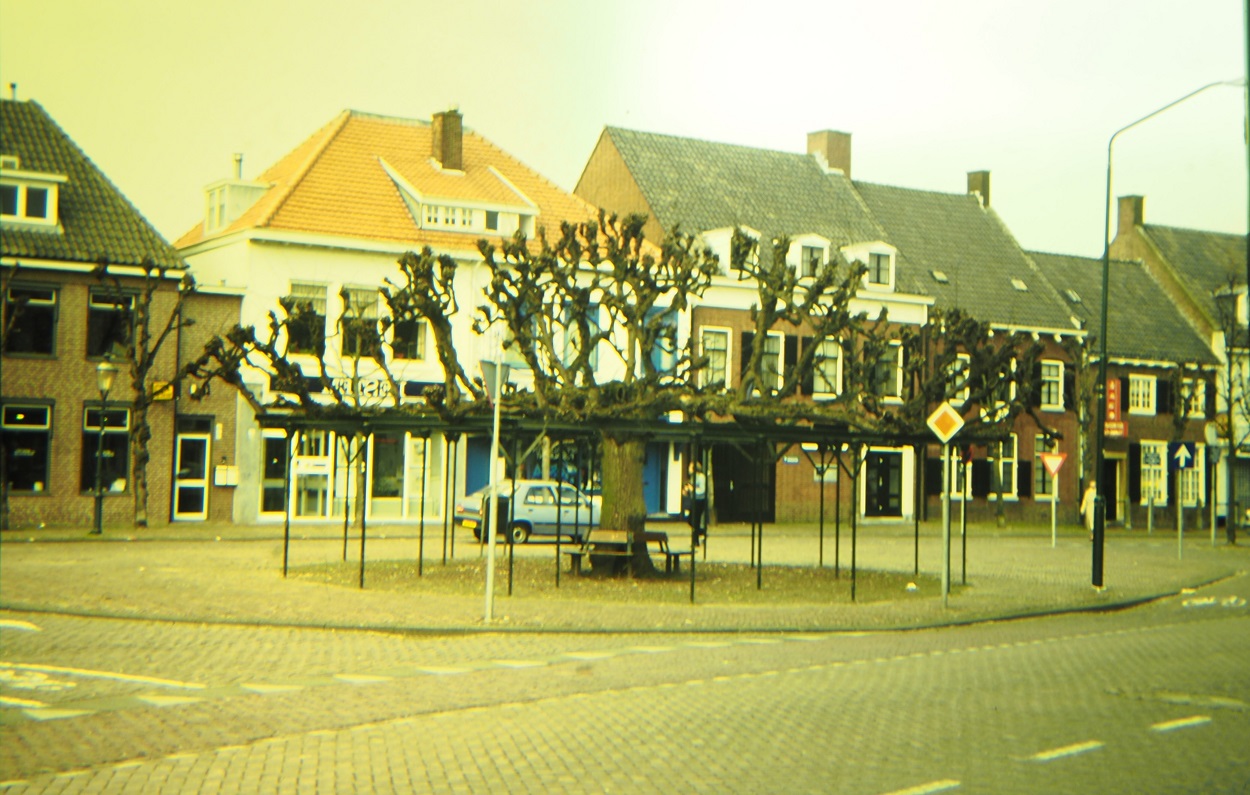 Moeierboom 1990, same position, fitted in as an obstacle 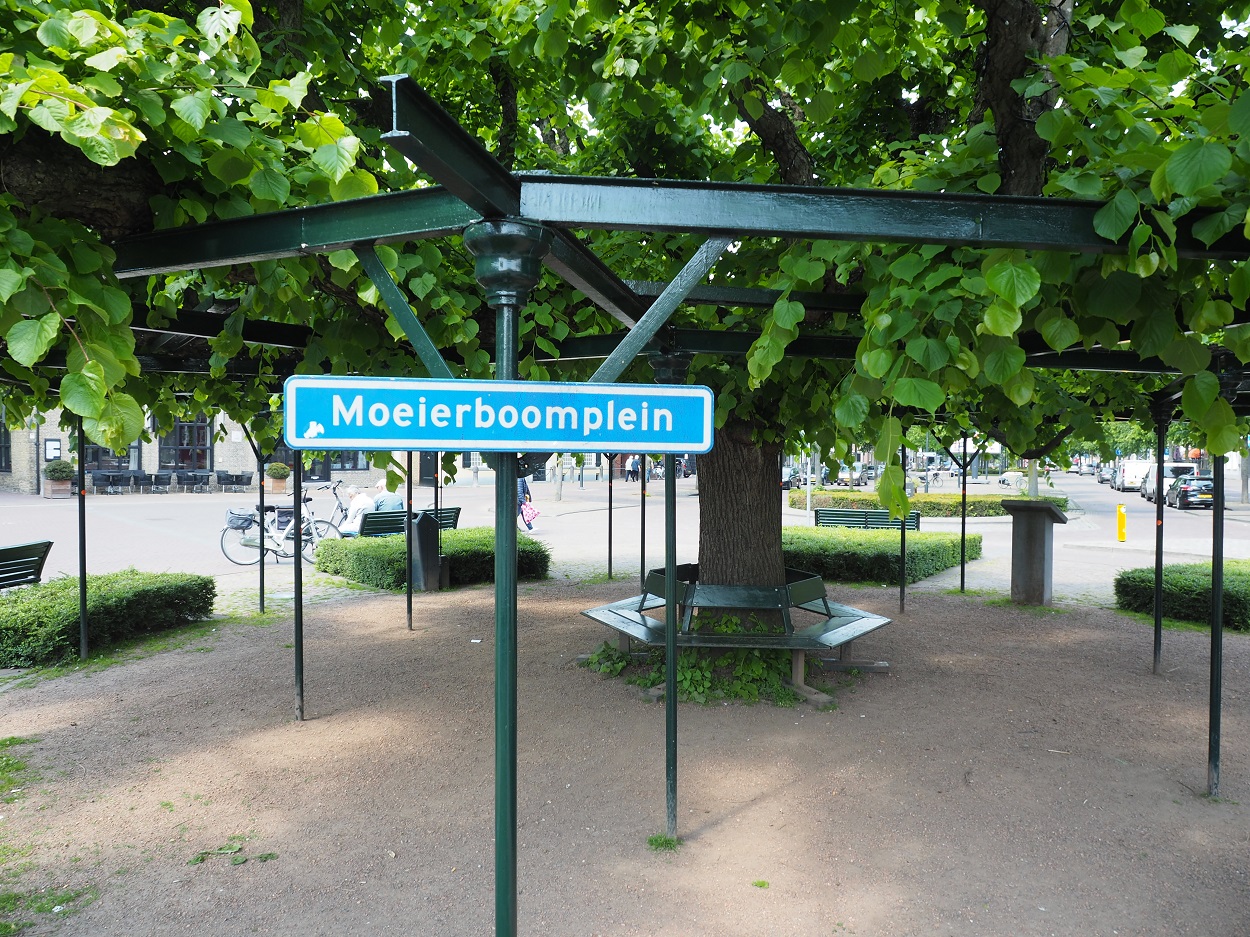