The fact that our climate is changing is quite clear by now. Be a climate change believer or not, let me warn you that we must increasingly protect trees from sunburn. In the past we were told that beech trees could suffer from it. We had to be careful with it, especially when felling trees in patches or in tree lanes. As a result, all other beeches in the immediate surroundings could be the affected by sunburn. By 2020, we gained some knowledge on the matter and we are aware that more tree species are sensitive to this phenomenon.

Trees with a thin bark belong to the risk group that suffers from sunburn. Sunburn is caused by the dying off of bark tissue when the surface temperature of the bark and cambium zone reaches 45-47° C. The causes may be diverse: due to drought stress, the cooling of sap flow in the trunk decreases and, due to strong radiation and high temperatures, bark damage occurs. Due to strong temperature changes in the spring, the bark tears open and dies. The lack of wind or a persistent wind flow, the tilt of the trunk and the position of branches that face the sun (as is the case of weeping beeches), all these factors can enhance the effect of sunburn.

The first visible effect of sunburn is the aging of the trunk. After the death of the bark tissue, a slight backlog and dent formation in the longitudinal growth of the trunk can be observed. The dieback can always be found on the west to southwest side and originates from the base of the foot to about 1.5 to 2 meters in height. Eventually, dieback can continue just below the joint of the first branch. The bark becomes rough and, as the thickness of the trunk increases, dead bark parts will come off. The tree responds with a reduced growth because the sap flow is limited. Besides, the exposed sapwood is a great entrance point for secondary infections. Trees with drier wood types such as beech are normally affected by not so harmful saprophytes. Trees with moister wood types though, such as limes and maples, can quite easily develop parasitic fungi that doom the tree to its end. Thus, trees in nurseries may become unsaleable and planted trees may be replaced repeatedly.

In 2019 I experienced that pruning shaped trees can also lead to sunburn. I pruned several shaped silver maples in my garden on June 29. I have been pruning these same trees for over 25 years shortly after the longest day of the year. Since they grow quite broadly, more than 75% of their leaf mass is reduced during the maintenance process. Later in July, a heat wave  of up to 40° C strook the Netherlands. This unfortunately resulted in a sunburn later in October. Now, a year after the pruning, every tree shows some bark and trunk damage. As the leave mass was minimized during the pruning, sap flow was reduced. Thus, the silver maples couldn’t cool off the tissue properly, and coupled with the drought stress caused by the pruning, sunburn appeared.

Tree sunburn prevention is a highly important task. There are several products are available for it, and among them jute tree straps are quite common. Jute straps remind me of the old days when I was a tree surgeon. In the early 1980s, all transplanted trees were wrapped with jute straps. During the same  time period, the so named Dutch “Tree Care Practicing Circle” (Kring Praktiserende Boomverzorgers, KPB) developed a critical attitude regarding working habits that didn’t necessarily have sufficient back up support. Besides, at that period, giving yourself the tag of tree surgeon, which I will debate in another blog, one of those habits was the use of jute straps when transplanting trees. It was often dismissed by critics as a mere signal indicating tree transplants; apparently no effect of the jute straps was to be expected. However, it is undeniable that the KPB attitude was quite effective and that this had an impact on the entire development of our profession. In fact, over the years, less and less jute straps were used when transplanting trees.

And then we passed the millennium and reached the new normalized working schemes where we find more and more sunburn on trees. Nurseries have massive problems with trees located at the head of the lanes and at the west side of the plots. In the public space, we see both poorly growing young trees and older trees mostly in a bad condition, where damage from sunburn is visible. Till this point, the list of genus and species on which I have seen sunburn is quite diverse: horse chestnut (Aesculus), maple (Acer), hornbeam (Carpinus), beech (Fagus) – sunburn is also visible in the top branches of its weeping variant (Fagus Silvatica ‘Pendula’ )-, ash (Fraxinus), tulip tree (Liriodendron), Magnolia, princess tree (Pauwlonia), holm oak (Quercus ilex), and lime (Tilia). This list is certainly not complete, and basically involves tree species that have a somehow smooth and thin bark.

So what can we do when it comes to sunburn? First of all, we should ensure that trees don’t suffer from drought stress. This means that trees that have been planted or transplanted must be provided with sufficient moisture at a decreasing frequency for at least three years. Even if it might be debatable, the watering intensity has sharply increased in the past years due to the more common long and dry periods. Another measure against sunburn is to prevent drought stress on trees under poor conditions, or otherwise said: ensure good resilience by designing a proper growing place for urban trees.

We also have several temporary measures to prevent sunburn. These are usually necessary when the surroundings of the tree have significantly changed, such as when transplanting them or when they are suddenly exposed to direct sunlight. I am mostly in favor of those products that degrade on their own within three seasons, including jute straps. Both German and Dutch research studies have shown differences in various sunburn protection products. For instance, they found that bark temperature increases even higher with close-fitting materials than with reference trees without trunk protection, thus causing greater bark damage. Unfortunately, they didn’t include the thickness of the straps in their research. Normally, adhesive materials with bright colors are suitable options for protecting the straps, but practical experience also shows that jute straps are still well protected if applied with a two to three-layer overlap.

Durable protection such as reed and tonkin-cane matts are also available on the market. These should be kept away from the trunk and there should be a certain amount of coarse mesh (0.2-0.5 cm) to allow some sunlight pass through. A disadvantage of this type of durable equipment is that the trunks remain virtually in a permanent shade, so they do not develop sufficient natural protection against the sunlight. They can also become a source of inspiration for vandalism due to the high flammability of the matts. If you remove the trunk protection after a number of seasons, it may be that you have only postponed the sunburn problem and that the "spoiled" bark can still burn. On the other side, the main advantage of properly applied straps, trunk coatings or adhesives is that they disappear after a few years. Still, citizens might need some adaptation period to fully embrace dressed up trees. 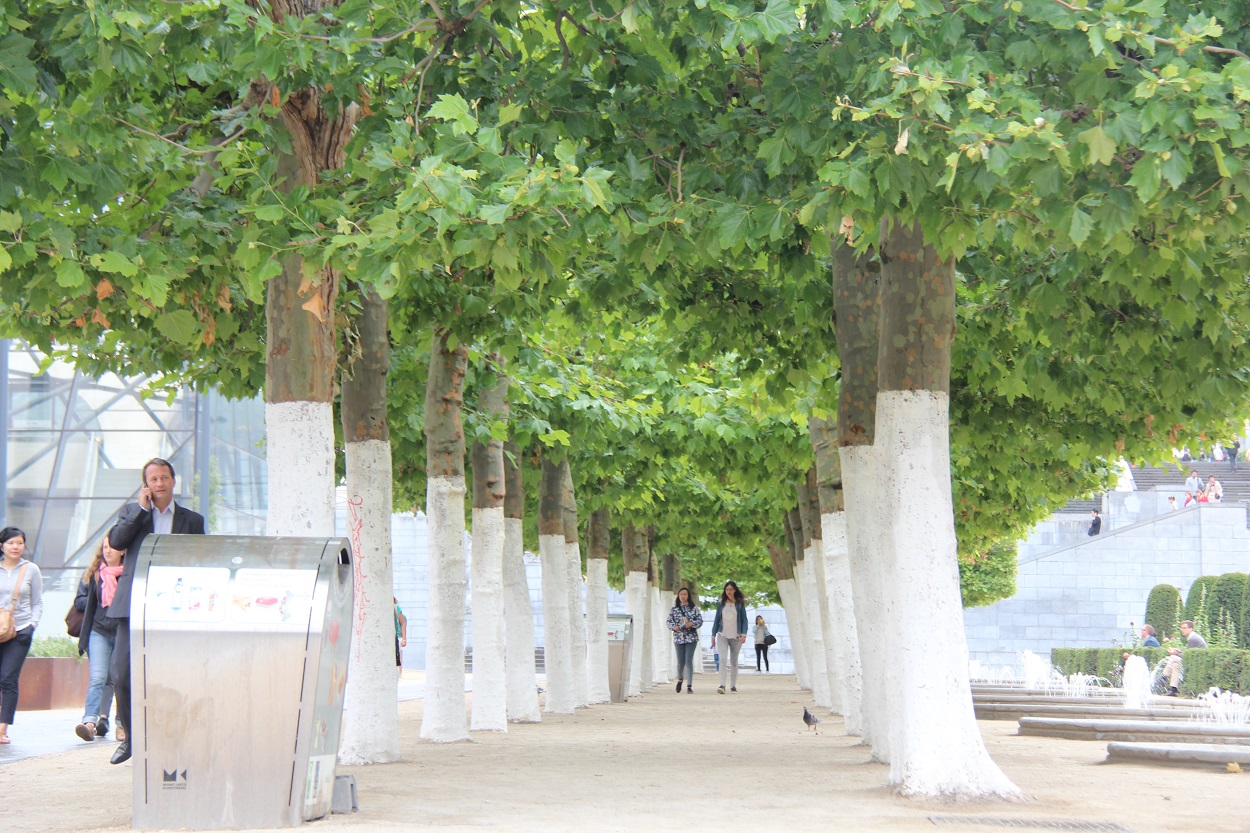 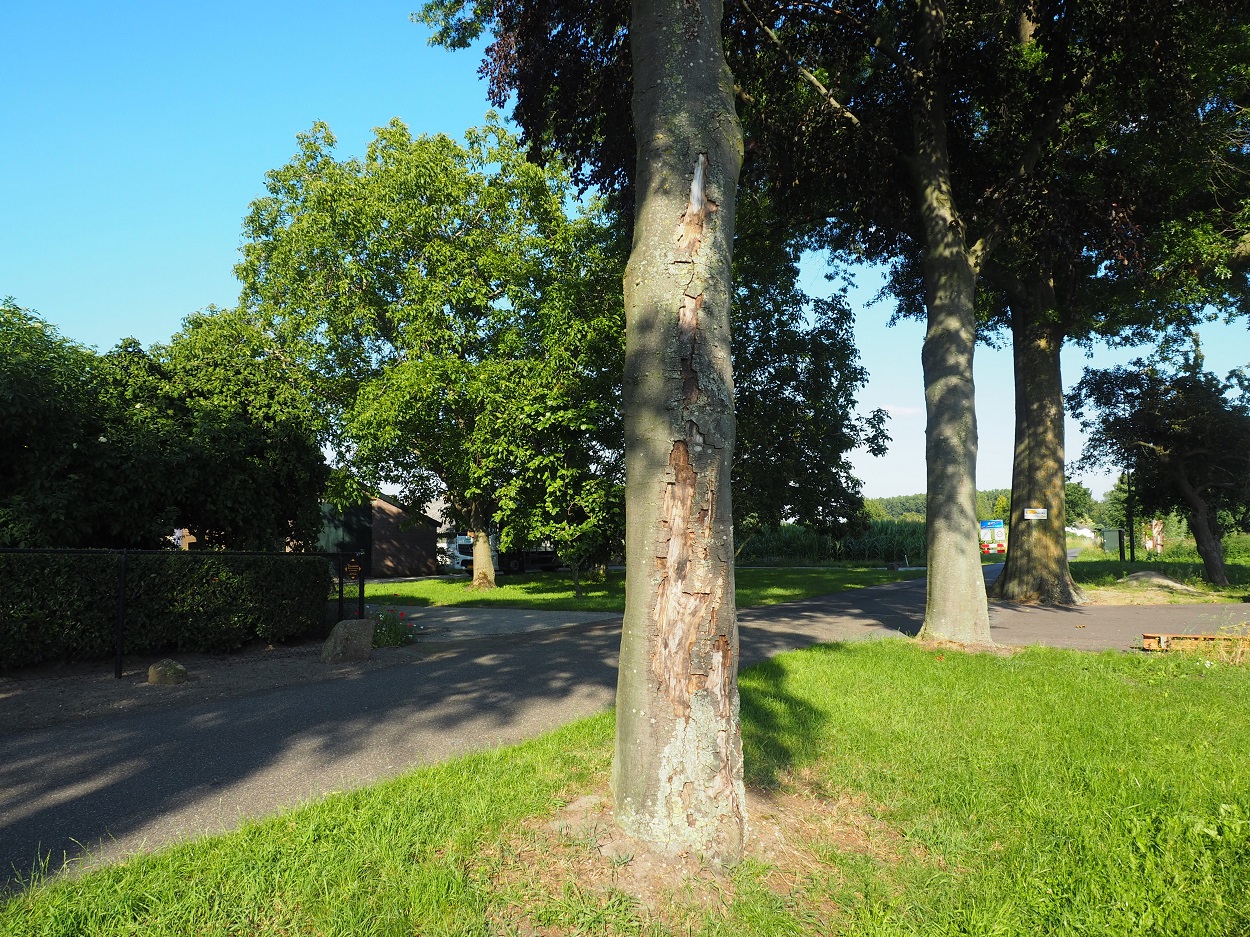 Shaped Tilia in a row with sunburn, Latvia 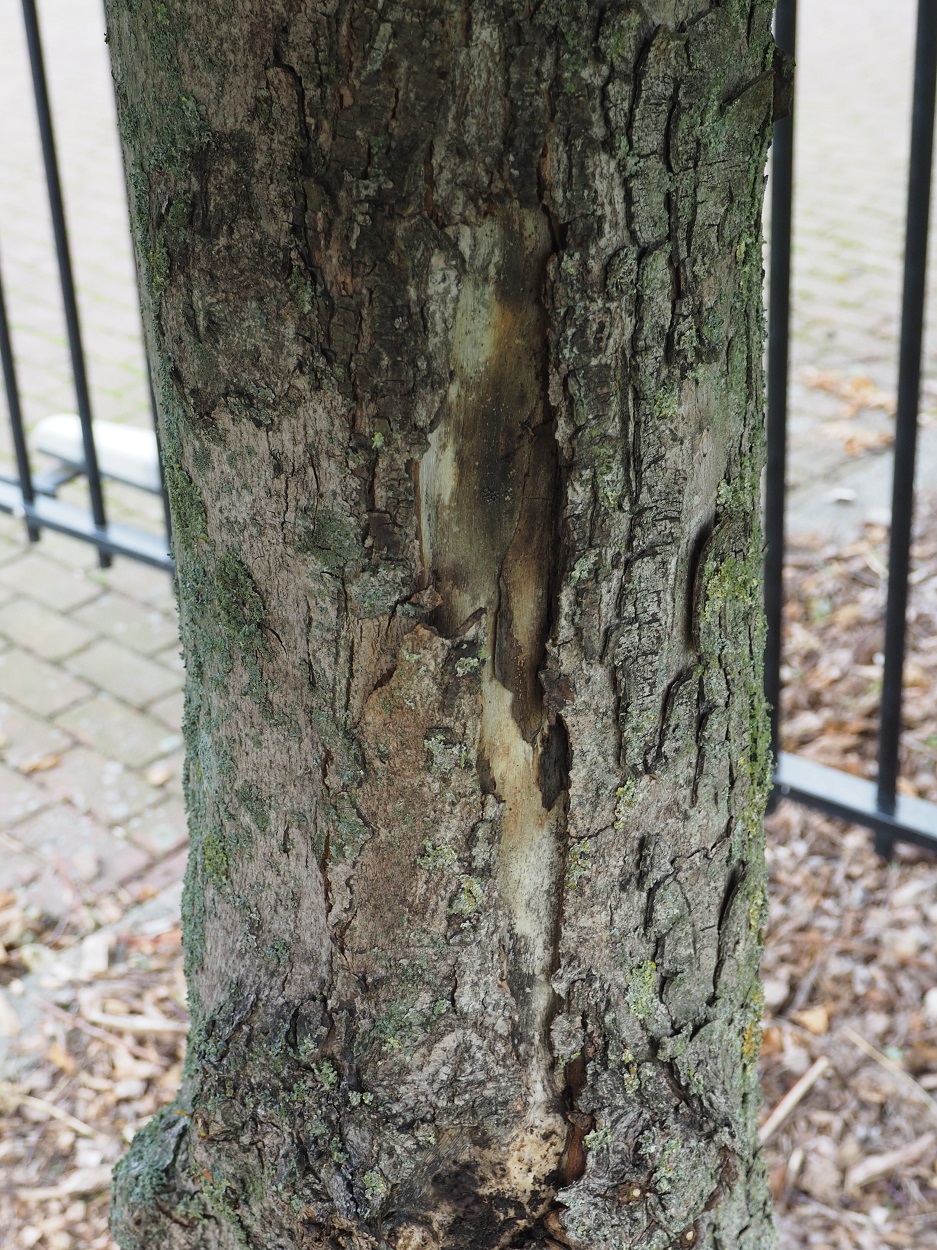 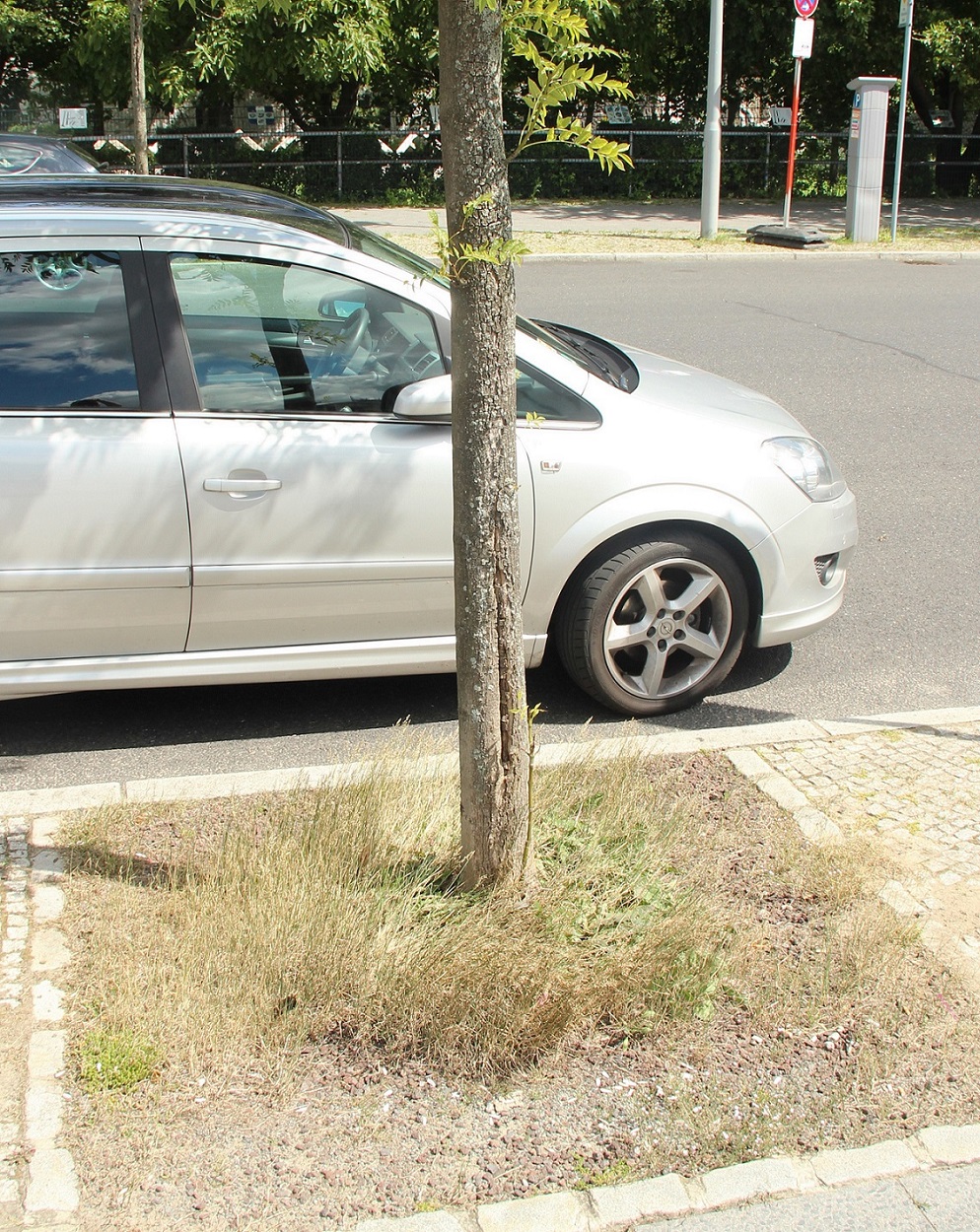