Sooty bark disease can no longer be ignored

Since 2014, we have become more and more aware of the presence of sooty bark disease on maple trees in both Belgium and the Netherlands. In 2020, after three consecutive dry summer seasons, newly reported cases increased significantly in both countries.

The disease is especially affecting individual maple trees that are already in a deteriorating condition. The practical management of trees with sooty bark disease is still a tricky issue because of the potential health risks for those in charge of removing the tree who may thus inhale the spores. But this is no reason to panic. Fortunately, an updated protocol is now available.

Sooty bark disease is caused by the fungus Cryptostroma corticale. This is a weakness parasite that enters the tree through wounds caused by external damage and/or pruning activities. The fungus is unable to penetrate intact bark or leaf scars. It settles in the woody structure of the tree and spreads vertically. Trees may show no symptoms for a while as the fungus can be latent in the tree for a long period of time. In fact, during the latent phase, the visual features of sooty bark disease are not yet clearly present. Under optimal conditions, the fungus starts to spread horizontally and forms spores. Only then is the disease visible in the deterioration of the tree and spore formation on the trunk.

Spore development is mainly stimulated by a decline in the condition of the tree, prolonged drought and temperatures above 20˚C. Cryptostroma corticale is a real spore factory; it forms an incredible number of spores. The spore formation takes place directly under the cork cambium (the upper part of the bark) and can grow into an area up to 1cm thick, which gives the trunk a cellulite-like appearance. The extremely delicate cork cambium then snaps and the spore pocket is released in the immediate vicinity, causing sooty rash and jet black bark. The spore burst can be observed almost all year round. In addition, maples with sooty bark disease often show a characteristic spotty brown/green discolouration in the wood that disappears when the disease is expanding.

To be sure that a maple is affected by sooty bark disease, the spores must be analyzed to determine whether they match a specific set of morphological characteristics. Relying on first-sight visual assessments may lead to false conclusions. In fact, 50% of the samples processed by Terra Nostra show no traces of sooty bark disease. After the diagnosis, precautions can be taken to ensure safe tree management. Given the latent nature of the disease, it is advisable to prioritize the removal of maples which are in an irreversibly bad condition and have no characteristics of sooty bark disease, in order to prevent the tree from developing it at a later time.

The disease is mainly diagnosed on sycamore, Acer pseudoplatanus. In 2020, it was also identified four times by Terra Nostra on Norway maple, Acer platanoides, and only once on Acer platanoides ‘Crimson King’. In the past, after experimental inoculation, the disease developed on 14 maple species including A. saccharinum and A. negundo. Halfway through the last century, the disease was also sporadically diagnosed on birch (Betula), linden (Tilia), and hickory (Carya). However, infection on these genera does not seem to be an issue at this moment. The fungus is originally from North America and has previously been found in Western and Central Europe, mainly in urban environments. However, forest areas now also appear to be affected on a larger scale. For instance, thousands of trees have died in a short time due to sooty bark disease in Germany.

The fungus reproduces asexually and spores can spread across long distances on the wind. As anticipated due to the previous dry summers, there has been a significant increase in the number of affected trees and locations. In Belgium, this is especially clear in the Kortrijk region. Several new locations were also reported in the Antwerp region, some of which involved a large number of infected trees. In the Netherlands, various cases were determined by Terra Nostra in 2019 and 2020, especially in the south and central regions of the country. In 2020, an exceptional location with multiple affected maples was identified in Venlo. All in all, it seems that the increase in the disease is coupled with the accumulating negative effect of repeatedly dry summers. Since sooty bark disease is not yet recognized by everyone and is not centrally reported, it is suspected that there are many more locations in both the Netherlands and Belgium. Take my recent discovery of an affected roadside tree during my recent hike in Belgium around the Maaseik area as an example.

Sometimes it is not possible to macroscopically distinguish samples with and without sooty bark disease. That is why using a microscope to analyze the spores of Cryptostroma corticale is crucial. In cases where there are no traces of this fungus, a follow up investigation is often needed. Nevertheless, by excluding sooty bark disease, large management costs can be avoided because the tree does not have to be handled in a special way. A maple in deteriorating condition with bulging cork cambium, strong black discolouration and the presence of ‘soot’ around and on the trunk are the factors that lead us to suspect sooty bark disease. Black bulges or bleeding spots on the surface of the bark are not typical characteristics.

Spores of sooty bark disease can cause chronic pneumonitis. They are a problem particularly for people who come into contact with many spores and who do not wear personal protective equipment to prevent spore inhalation. Those with an immune system disorder should avoid the immediate vicinity of an infected tree, but the majority of people who pass by do not need to worry about the disease. It is important for the tree manager not to panic, but to manage the tree in a way in which safety is a high priority.

It appears that the risk of adverse health effects is still sometimes stubbornly ignored when trees with sooty bark disease are removed. As an employer, it is your duty to protect the health and safety of your employees. This means that if you know that sooty bark disease is present, you cannot get away with ignoring it. Both the client and the contractor have an obligation to share this information and to make sure that tree workers are adequately protected with proper PPE. Since sawing and lugging branches are very physical activities, wearing respiration protection that consists of an overpressure mask with a P3 filter is the most comfortable solution to safely removing a tree.

The most recent protocol issued by the Dutch national health and safety service Stigas in October 2020, drawn up with Terra Nostra and included in the Health and Safety Catalogue, gives a good picture of how personal protection should be applied when processing a tree with sooty bark disease. During processing, the tree should be kept wet as much as possible to minimize spore release. For the same reason, machined felling is preferred whenever possible.

The BVOR, the Dutch association of biowaste processors, has advised its members not to accept wood contaminated with sooty bark disease due to the risks of dispersal and spore inhalation. Burning entire branches and logs in waste incineration plants is also not a practical solution since such plants usually refuse to process unshredded material. When processing trees affected by sooty bark disease, there is a risk that spores will spread. Processing should therefore aim to limit the drift of spores. In a residential area this may mean that it is best, if possible, for felled infected trees to be covered with a thick layer of soil. However, in many cases, it is still necessary to cover and transport infected trees in order to burn or reduce them elsewhere. Contrary to previous advice, the contaminated wood may then be reduced by a shredder or chipper, provided that it is expressly aimed at limiting the spreading of the spores. It is essential to use a machine that is adapted for this activity, including nozzles for the entire shredding and collection process, and an overpressure cabin equipped with P3 filters. A minimum of 50m has been set as the extent of a safe human-free zone around the felling or processing of contaminated materials, which means that affected trees in an uninhabited area can sometimes also be reduced on site. Any remaining spores that end up in the soil decompose quickly at warm temperatures. It has been found that 80% of the spores are no longer viable after 2 weeks of summer temperatures.

Trees infected with sooty bark disease are seen as waste. Therefore, the Eural code 020107 (forestry waste) has been designated as the most relevant. Such waste may not be buried or burned without a permit from the competent authority. Incineration of the shredded material is still possible in biomass power stations. However, they must initiate a separate work flow for this task, ensuring that employees do not run the risk of inhaling spores.

It seems clear to me that sooty bark disease can no longer be ignored. Careful attention should be paid to the correct identification of Cryptostroma corticale and to the implementation of relevant management actions. But above all, no panic should be involved.

Cork cambium snaps and the spore pocket is released 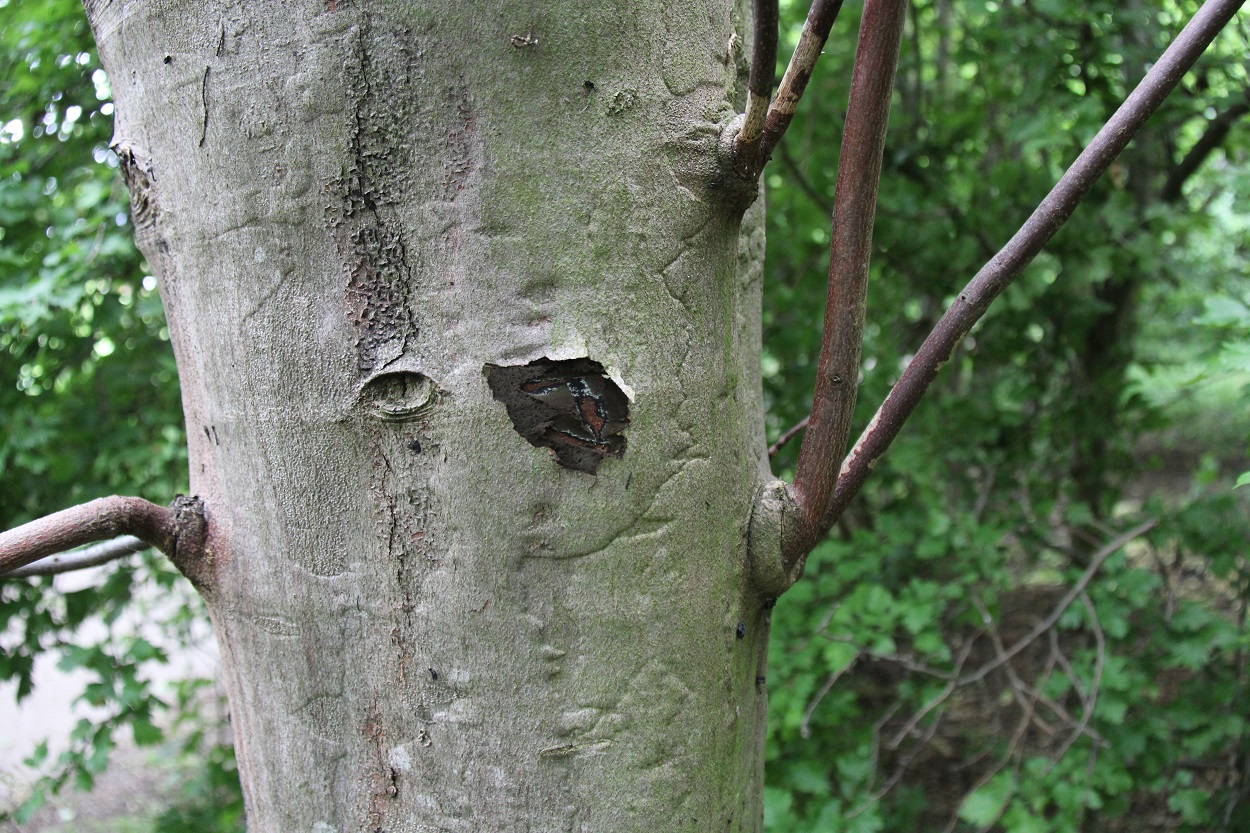 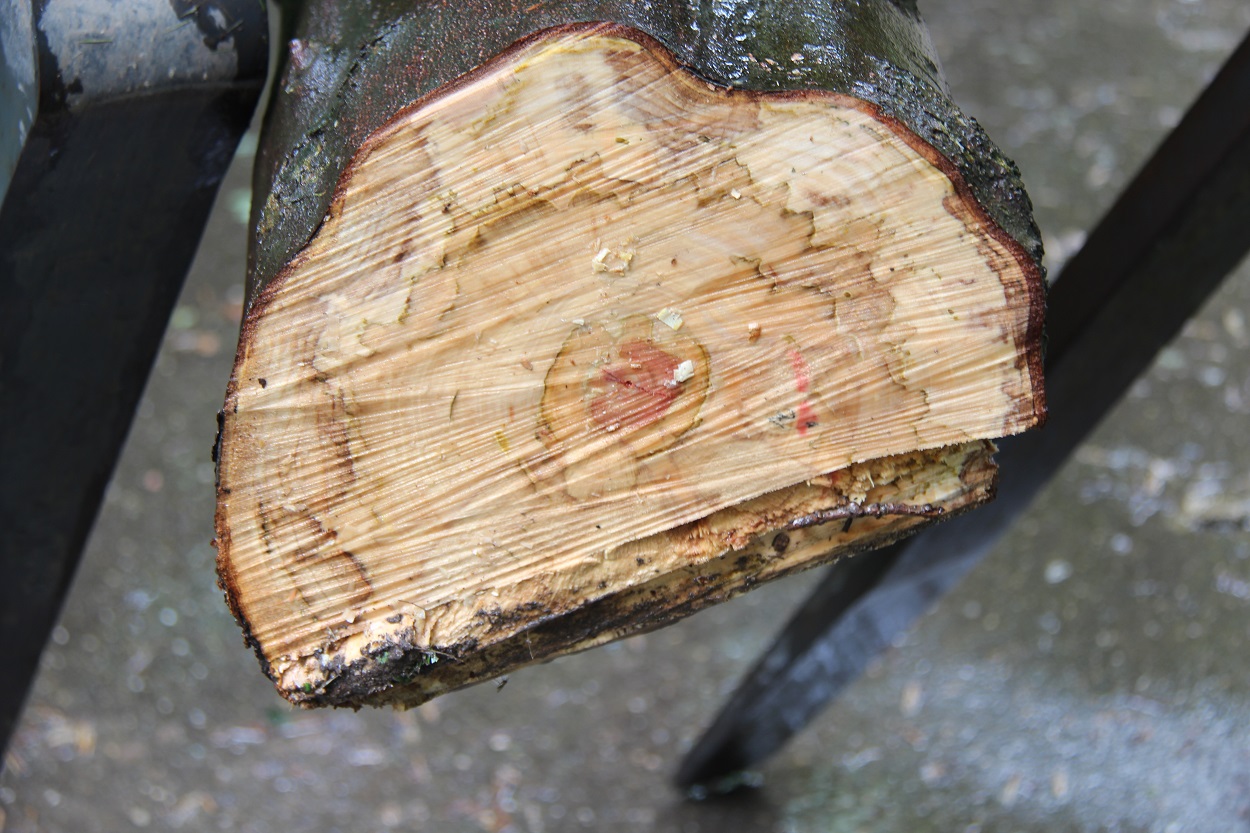 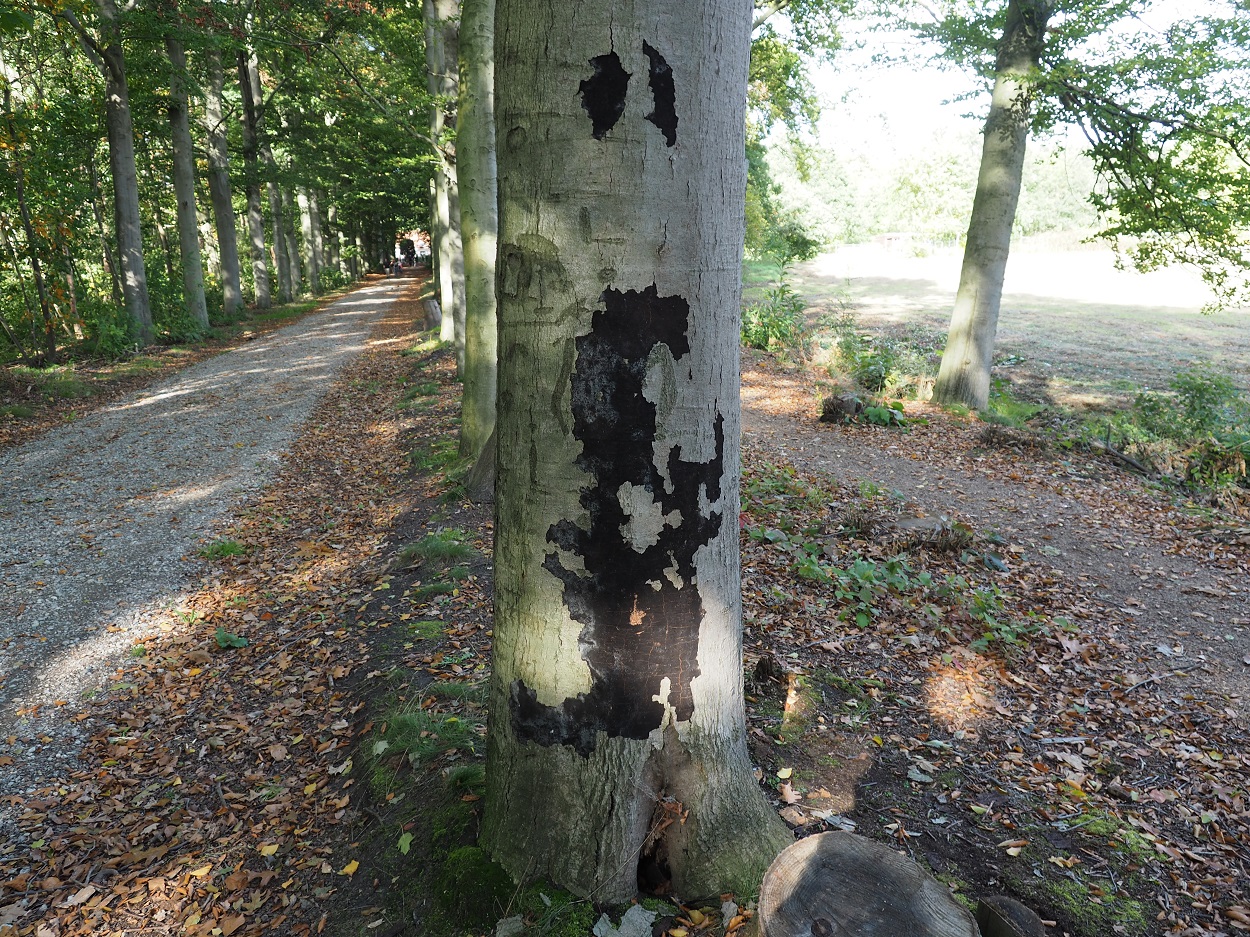 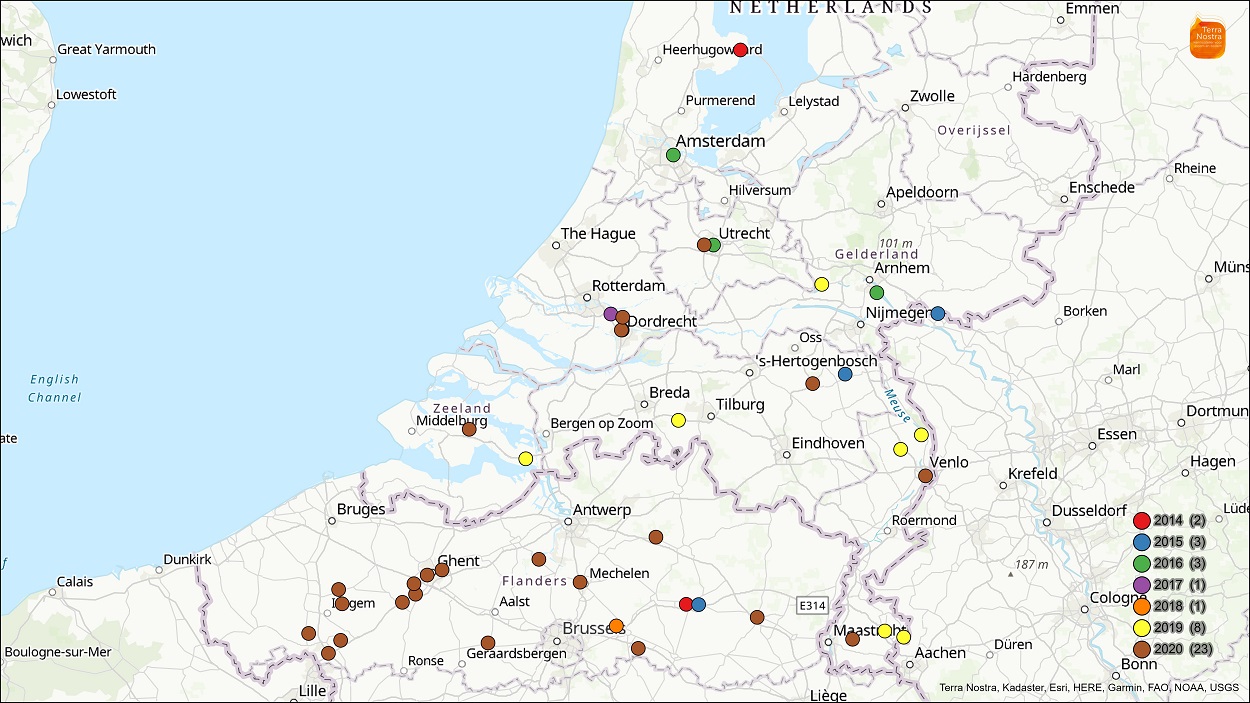 Overview Sooty bark disease increasing in Belgium and the Netherlands 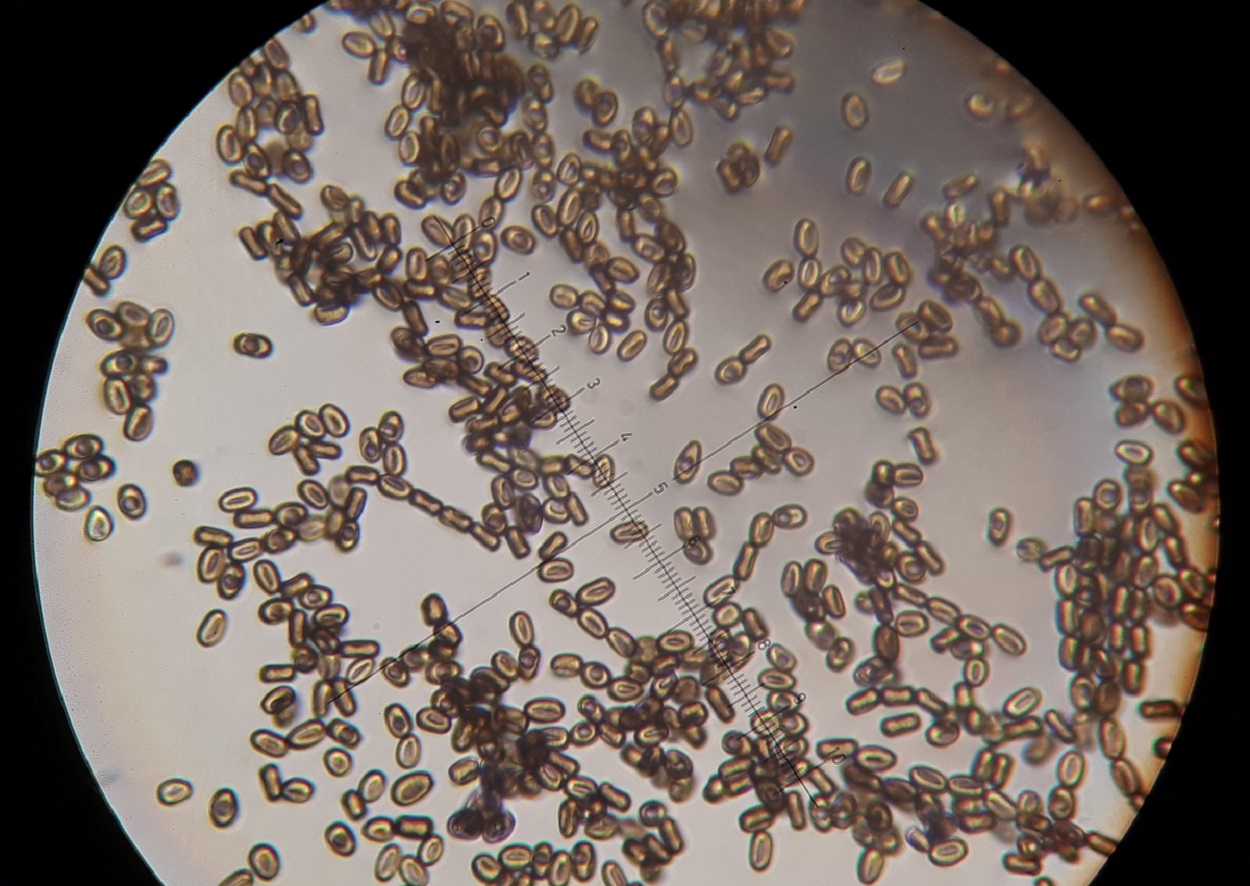