The term “tree surgeon” is hardly used in the Netherlands anymore; over the years it has transformed into “tree worker”. But not only the title of the profession has changed, also the knowledge within the profession has undergone an evolution over the past thirty years, in which old insights have been overtaken by facts.

The professional care of trees (outside forests) was deployed in the USA in the 1880s by John Davey, the founder of the Davey Tree Expert Company, now a multinational with over 9,500 employees. Back in those days the term tree surgeon started to gain traction. This imaginative name stands for providing tree care in order to save their lives. Trees get injured by storms and accidents, and may develop decayed spots and other health problems. Tree surgeons were their doctors and among other things, they apply medicines and splints, prune, fertilize and provide care for trees. There is a strong parallel with the human health care, but in this case the patients were the trees. For example, tree wounds were treated with sterilized water and afterwards covered for protection. Cavities were filled like a dentist fills a hollow tooth, and the accumulated fluid was drained. The ultimate goal of such activities was tree conservation.

In Germany, the arboricultural business came into place in 1935 by the Maurer firm. Having the American pioneers as a reference, they developed a similar working method as the one that Davey implemented. Many monumental trees or “Naturdenkmal” in Germany still show traces from this period. A professionalization towards urban trees also took place in the United Kingdom. The Arboricultural Association was founded in 1964 out of the need of having a scientific and educational organization that could enable the sharing of knowledge about urban trees.  In 1966, tree surgery was introduced in the Netherlands by the brothers Allrik and J'orn Copijn. Both brothers where trained by the Maurer firm for a five year period and their enthusiasm grew even more when attending tree care conferences in America. All of this tree surgery companies worked towards and represented the importance of protecting and conserving trees.

In 1983 I left the rural Brabant area and started to work as a tree surgeon assistant at Copijn in Utrecht. My Brabant acquaintances where often shocked when I told them what I was going to do: “When a tree is in poor condition you should easily cut it!”, was the usual response. As a nature lover, it was a grateful surprise to discover that especially in the urban environment people stood up for the importance of trees. As far as I am concerned, the core of these activists was the Friends of Amelisweerd group. In 1992, they even chained themselves to trees on the Amelisweerd estate in Utrecht to prevent the felling of trees as a consequence of widening the A27 highway. This was a remarkable and refreshing attitude towards the protection of trees, and I concluded that as the urbanization around trees increased, people showed more involvement.

The main remark of the 1980s was the automatism with which we performed the tree surgery operations. We took everything that was presented to us as a gift. We treated trees as patients where we barely wore a white overall. Although the talk was that Jórn Copijn used to give instructions in a white dustcoat. But no, we wore green overalls over our jeans and Helly Hansen blue sweater and as personal protection for the chainsaw without chain brake we wore, …ear muffs.  Cutting branches as smoothly as possible at the base of the trunk had just become obsolete in the 1970s, and the new instructions were to cut through the thickened branch collar so that the wound overgrew stronger. An action for which you can now fail during a Tree Worker exam. We used a wide variety of medical terms. If we cut off a branch, we would treat is as wound and we had to cover it to prevent infection. For this purpose, we first used Lac Balsem, which Germans called "kunstliche Rinde" (artificial bark). Later on Lac Balsem became Dendrosan. We spread this brown plastic mixture on every wound, and as an arborist assistant you were allowed to climb the tree with the pruner to cover all of his wounds. A bit of a silly job, but at least you learned how to climb. Luckily I am a tall man and could easily reach even the wounds at the very end of each branch, because of course, we were not allowed to leave any single wound uncovered.  After a week, your green overall was covered with Dendrosan. I also regularly plucked large dried blobs from my then luscious head of hair. Mhm, maybe that explains my current haircut. The use of wound dressing was perhaps the first discussion within the. It was eventually proved that it had no positive effect on the tree and that it was mainly cosmetic procedure.

In the opinion of Dutch tree surgeons, filling cavities was an outdated technique at that time. If there was a hole in a tree, we would mill it out because we were told and therefore convinced that this would remove fungi. The result was that we spent days milling out one single tree. Still as soon as temperature drops below 10 °C I am reminded at this time by my frozen fingers. We took milling very seriously and even reached the white hard healthy wood. As employees of Copijn, we had the chance to work at the most unique monumental trees in Benelux and Germany. I can still remember the time when we worked side by side when dealing with a huge hollow Tulip Tree. This tree was called “the gnome” because of its convex rootstock and wide opening through which you could crawl inside. The gnome was on the grounds of the Nienoord carriage museum in Leek, Groningen. We were milling that tree when it suddenly gave a notorious bang. It turned out to have a major cross crack in its inner wall. A defect for which nowadays that tree would probably be on the emergency felling list. We clearly went way too far but didn’t realise. We understood this was the moment to stop and stepped relaxed out of the hollow gnome tree. If you were to open a cavity in the trunk, let’s say for getting a better access, it had to be stitched by attaching iron wire ends which had to be drilled through the cavity edge, and then attach it  about 50cm around the cavity to restore the ring tension. I never came across this term again, ring tension sounds more like circus fears to me. Anyhow, the sutures were smeared with tar, the cavity was impregnated with Siosan and the wound edges were covered with Dendrosan. Siosan was anything but a friendly product, we were not allowed to apply it on the living sapwood because then it could die. Also, out of experience, I wouldn’t recommend to spread it on your own face, since I developed a rush on my face in strong sunshine for over two years!

What a surprise, the milling of trees didn’t turn out as expected. A great example of this is the Kroezeboom or “Frizzed Oak Tree” on the Fleringer Es in Tubbergen, which can be seen in the photos below. In a very nice historical Polygoon journal movie  from 1974, we observe a caring tree surgeon fiercely chopping and scraping the rotten parts of the then almost massive trunk of the Kroezeboom. I also had the honour of working on the Kroezeboom in 1986,  and as seen on the photos, by then more wood material had already disappeared from the trunk. In 2000 my children, aged 5 and 6, stood in the same location. Then in 2016 we can see my grown up daughter once again standing in the completely hollow trunk of the still impressive tree. The milling stimulated rather than inhibited the rotting of the trunk, but thanks to the many anchors, the breakage of the crown has so far been prevented.

Anchoring trees was a standard procedure in the 1980s. I have installed hundreds myself, or better said, I places many kilometres of steel cables in trees. As soon as we saw a "heavy" branch, a tension anchor and a storm anchor were mounted at one quarter and three quarters height, respectively. The second one had to hang loose. We attached both with a threaded end straight through the trunk,  to which an eye bolt was mounted. These steel cables gave many headaches when pruning the oldest tree of the Netherlands the Linde of Sambeek in 2015, because the more than 40 years old anchors were worn out and the current support-dependent frame branches could easily break out in the event of cable failure. Nowadays, the use of steel anchors has been replaced by nylon lines, which is not necessarily an improvement because steel cables can prevent a branch from breaking. Their installation method can be open to debate though.

A remarkable detail is that I had never heard of the term "bark inclusion" in the early 1980s, it only became clear to me when I joined the KPB. It was in the late 1980s that more and more knowledge arose about the self-defence or self-locking of trees, clearly described by the CODIT model published by Alex Shigo in 1985. With this, the milling of trees became increasingly obsolete, which also meant that the term “tree surgeon” declined in power and increasingly came to stand for "Old School". Pius Floris also played an important role in this, since he brought to the Netherlands both Shigo with the CODIT model as well as awareness and knowledge about mycorrhizae. He also began his crusade against tree surgeons whom he called “iron farmers”. In 1992 the European Arboricultural Council EAC was established,  and in 2000 the first European Tree Worker examination took place in the Netherlands, and later in 2005 the first European Tree Technician examination. This finally resulted in a certification with which a minimum amount of required tree knowledge was guaranteed and often required by clients. More and more “tree workers” and “tree technicians” were on demand and exactly these trendy English names became popular.

In the meantime, knowledge about the functioning of trees and soils in the urban environment has expanded considerably, and the commercial market has also developed products that contribute to the preservation of trees and the extension of their lifespan. We can now look back and say that the tree surgeons did not do it right, but this does not do them justice. I am grateful to the pioneers for having the guts to stand up for trees at a time when this was not common. Thanks to the insights gained then, we now know much better what is good and what is not. The call for the preservation of old trees continues to exist in our troubled country, which is permanently undergoing changes. There is still insufficient respect for our eternally living monuments, and we can still learn a great deal from the pioneers that came before us. 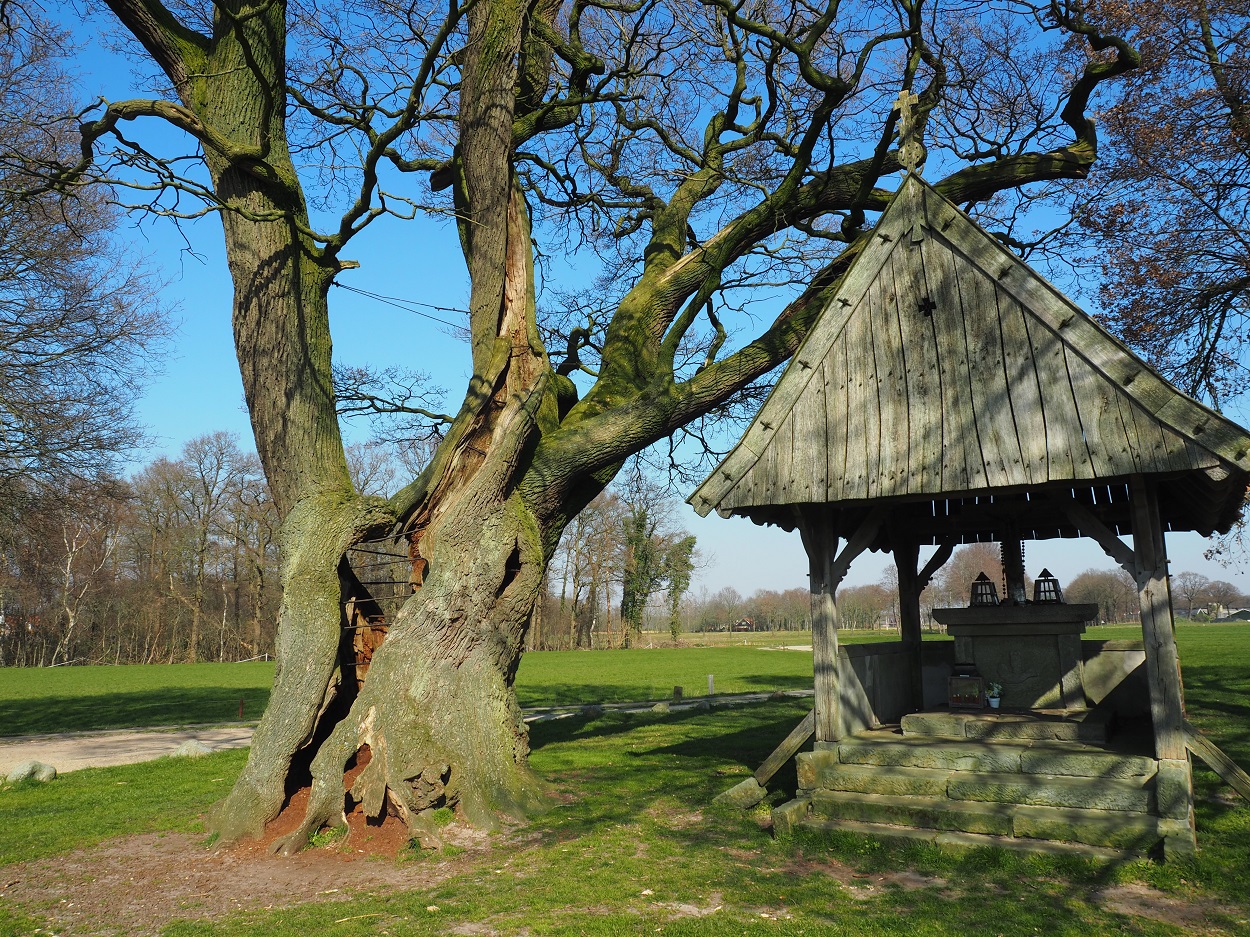 Frizzed oak tree is still present, thanks to or despite tree surgery? 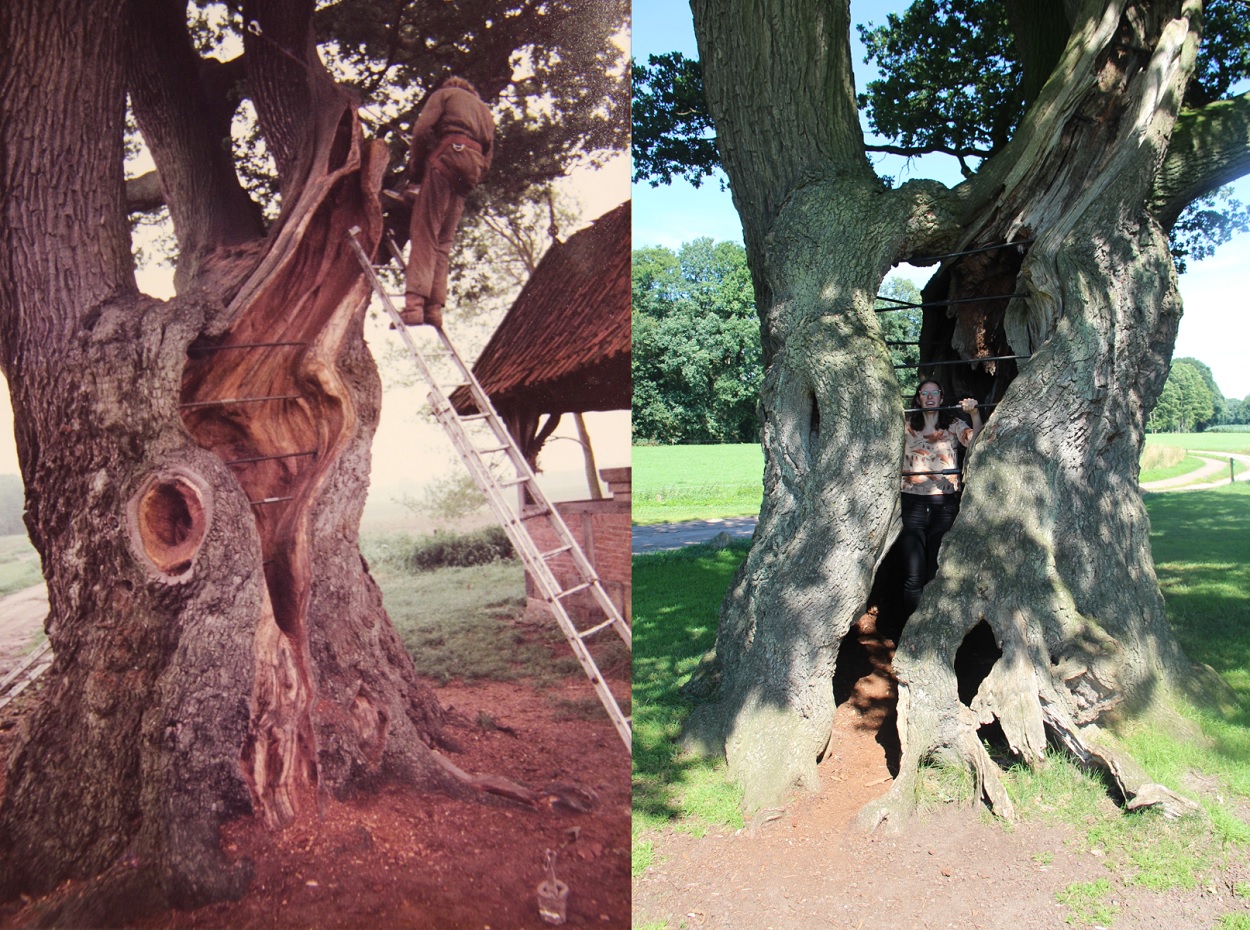 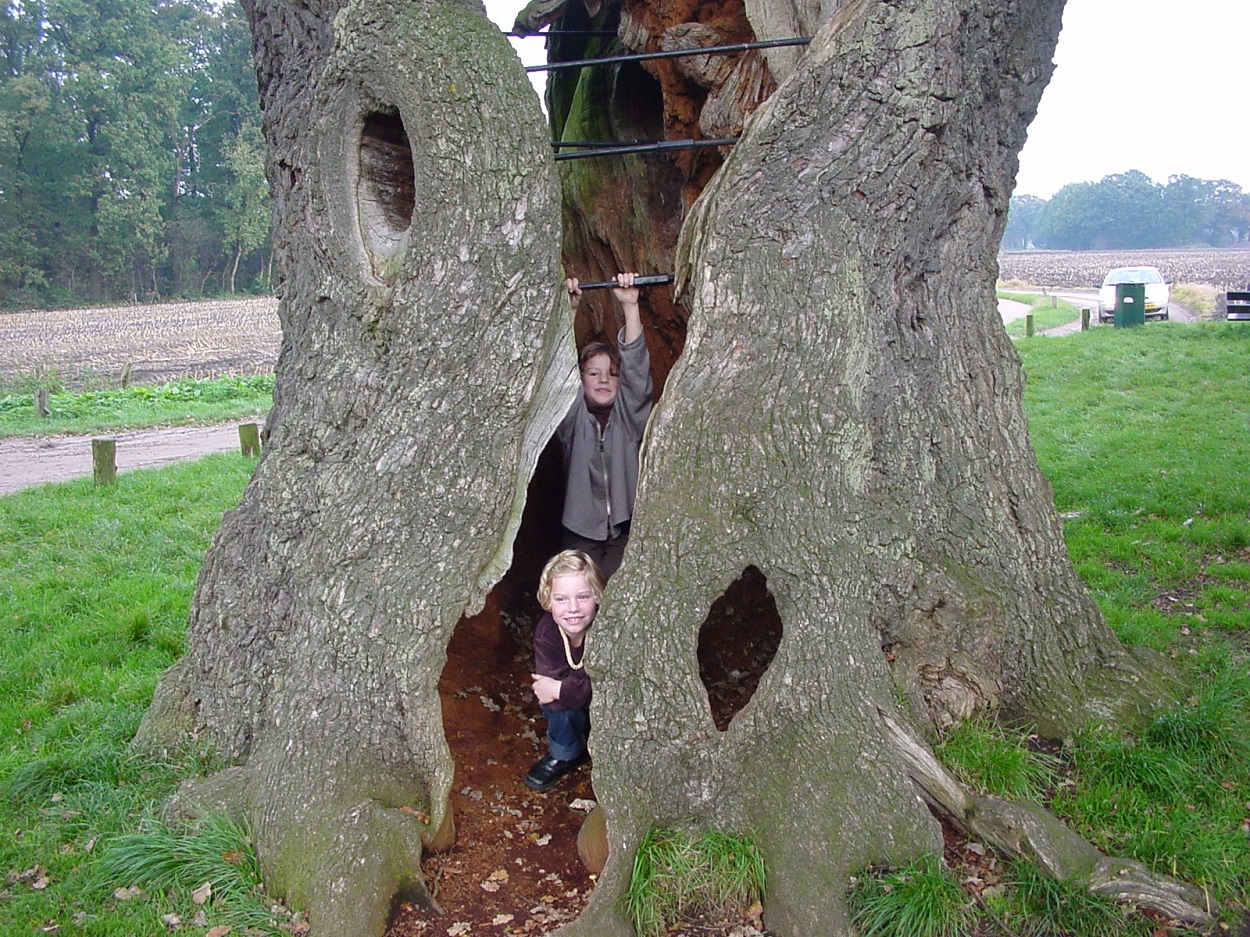 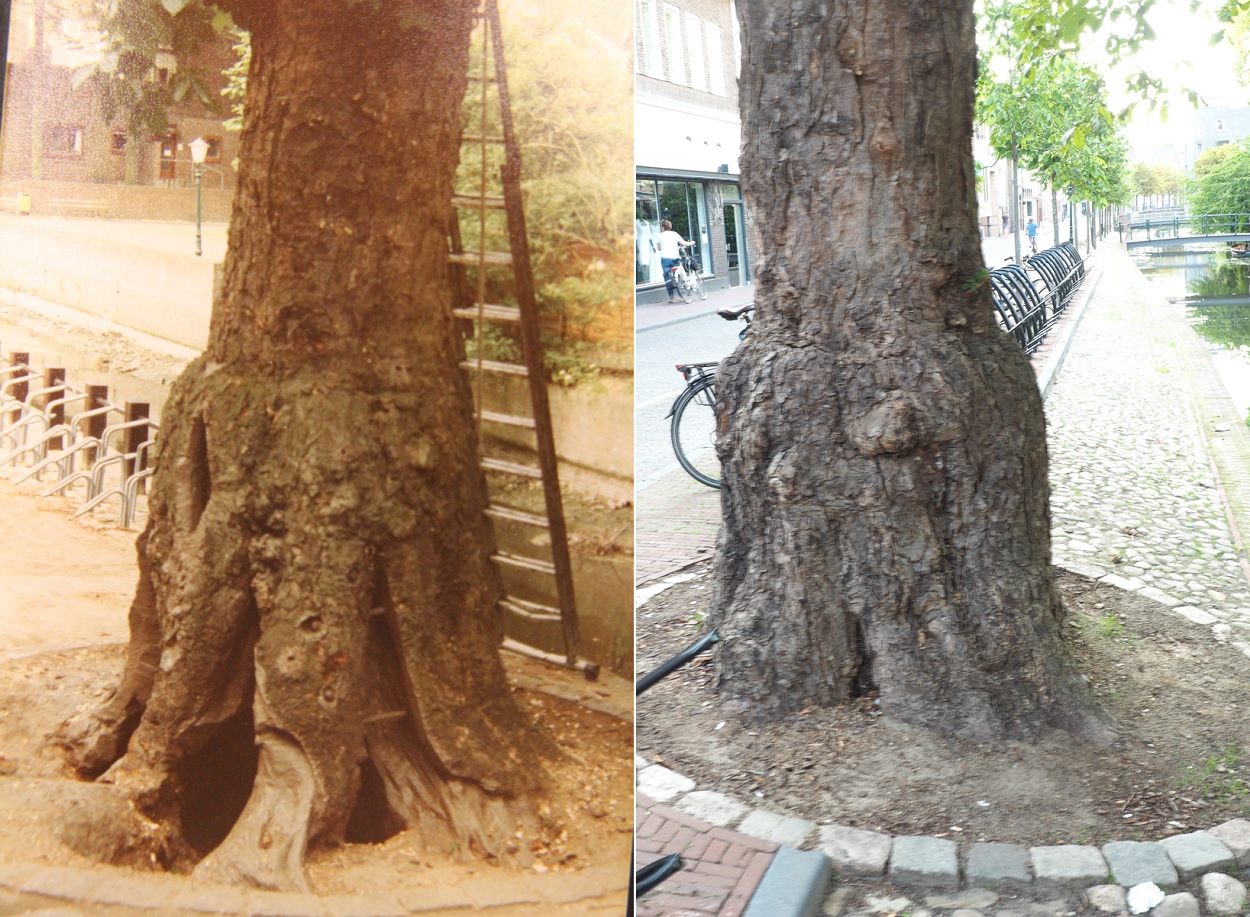 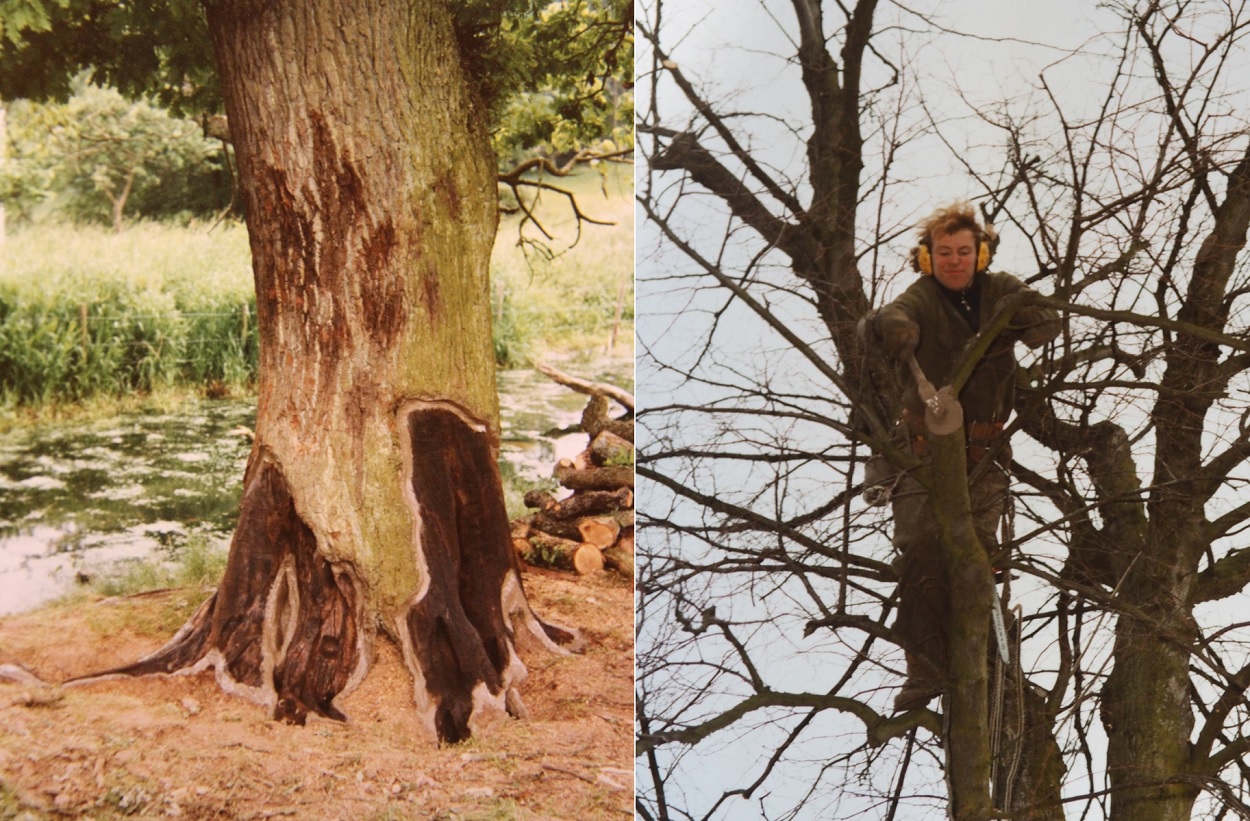 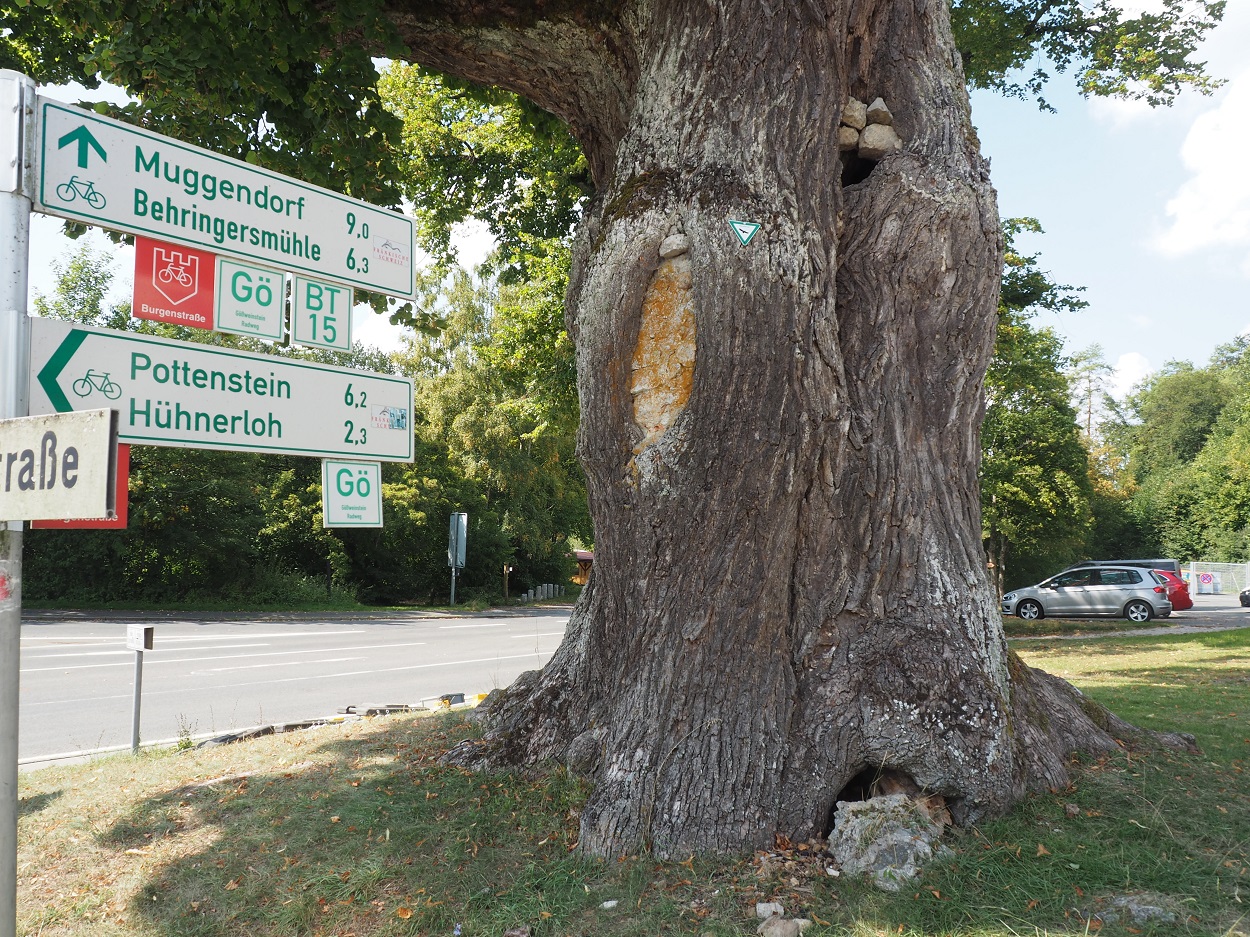