Enriched Biochar is beneficial for trees in the urban environment

We are creatures of habit and often do not take all the opportunities that we have. Internationally the benefits of biochar have been known for years, but in the Netherlands and this technology is not yet on our radar. After several years of testing, Terra Nostra has concluded that the results are positive for the future application of enriched biochar. Perhaps a slick promotional campaign is what’s needed to bring this product to people's attention. But prior to that, in the near future it’s important to focus on local production and local solutions for waste flows for the product to become truly sustainable!

Biochar is the international name for a charcoal-like substance that is created by heating organic material in a low (or no) oxygen environment, whereby the material is heated at a ‘low’ temperature between 400° and 800° Celsius. This process is called pyrolysis. As a result, the material does not burn to ash, but a charcoal-like structure remains, which could be used for barbecues. Compared with charcoal, which is formed at a much lower temperatures and requires the presence of oxygen, the structure of the wood and the majority of the carbon is largely preserved during the biochar production process. Thanks to this structure, biochar has many benefits for soil and soil life.

The people who live in the Amazon region have known for a long time that biochar has a positive effect on plant growth. Thousands of years ago the people who live there started to mix the soil with burnt wood residues created during low-oxygen combustion. This process formed terra-preta, a very fertile type of soil. Today many different organic materials can be used to create biochar, from tyres to sewage sludge. The only difference is that the material obtained will be used as a soil improver and not as fuel. The biochar that Terra Nostra has researched, uses wood as the raw material for the pyrolysis process.

The characteristics of biochar

Biochar is unique because it is very stable. Many organic substances decompose very quickly, especially when mixed with soils. Think of the type of compost that is available free of charge at the recycling centre: it has a black colour and it often smells like a poorly functioning sewer! This type of material will be almost completely decomposed within one year. These properties are not a good basis for the type of stable organic matter that our soil really needs. In the Amazon region, on the other hand, researchers have found biochar that is hundreds of years old remains. It is not true that biochar doesn’t decompose, but it certainly is a very stable material with a decomposition rate that is not perceivable by us. Depending on the pyrolysis process, it is known that 50% of the material still exists after 100-600 years.

Another advantage is that it has an amazing internal surface. The structure created by the pyrolysis forms a very large surface area. The internal surface of one teaspoon of biochar corresponds to the surface area of about two tennis courts. This internal surface area is so interesting, because it exponentially increases its moisture and nutrient buffering capacity. The structure itself becomes the living environment for soil life, such as fungi, bacteria and other organisms. This means that biochar is not a nutrient, but rather a storage shed that maintains and increases soil fertility over time.

You may start to feel suspicious when you hear me talk so positively about a product - it reeks of advertising! Time to look at some facts. Terra Nostra’s scientific research department has been researching the application for biochar for four years. My colleague, scientist Wendy Batenburg, has tested three different batches for a period of two years. These batches were based on ‘Amsterdam’ structural sandy soil, a coarse sand with a uniform grain size of >400 microns. One batch consisted of the regular ‘Amsterdam’ structural soil, which served as reference. In addition, two other mixtures were tested with biochar and enriched biochar with mycorrhiza fungi and various other natural mineral components. For the test, a sample of 10 x 1 m³ of each batch was placed into a big bag, into which a two-year-old small-leaved lime tree (Tilia cordata) was planted. In total 30 lime trees were tested over two years, of which 10 were reference trees. Above the ground, stress levels and the vitality of the lime trees were measured with a chlorophyll fluorescence meter. The degree of degradation, shoot length and leaf density were also measured. Below the ground the nutritional value (CEC value) of the soil was determined, the size of the roots was measured as well as the growth of mycorrhiza fungi.

The results were highly variable. Compared to the reference trees, the enriched biochar mixture showed by far the best results. More growth and, from the first year, less stress and more leaf vitality. Furthermore, the trees in this mixture turned out to be less sensitive to the larvae of the lime leaf wasp, which were able to develop extremely well on some of the other trees. Below the ground the results were also encouraging. The soil nutrient value of this mixture had decreased 11% after two years, compared with the reference mixture, which showed a decrease of 40%. The strength of the enriched mixture was also preserved, which is an important criterion for planting sand.

At the end of the two year trial the final destructive part of the research project was the measurement of the size of the shoots and roots. When you see these results, you can imagine how happy we are with the help we received from interns and trainee researchers! After two years the 30 lime trees were uprooted, which entailed removing the lime tree from the bulk bags with all roots intact. Then the shoots and roots were sorted into four diameter sizes: smaller than 2 mm, 2-5 mm, 5-10 mm and bigger than 10 mm. The data was totalled for each tree and for each batch.

The enriched mixture yielded more and longer shoots with a lower stress level and a better vitality. The root development in 1 m³ of the mixture was impressive. The ‘bare’ ‘Amsterdam’ structural soil reference mixture contained 706 metres of roots per lime tree. The enriched biochar mixture contained 1,028 metres (!) per lime tree. For the most part (98%), these were very fine roots with a diameter of less than 2 mm.

Is biochar a miracle material?

I have mainly focused on the application in a public space. Not only for this type of use it is important to conduct further research into the following: 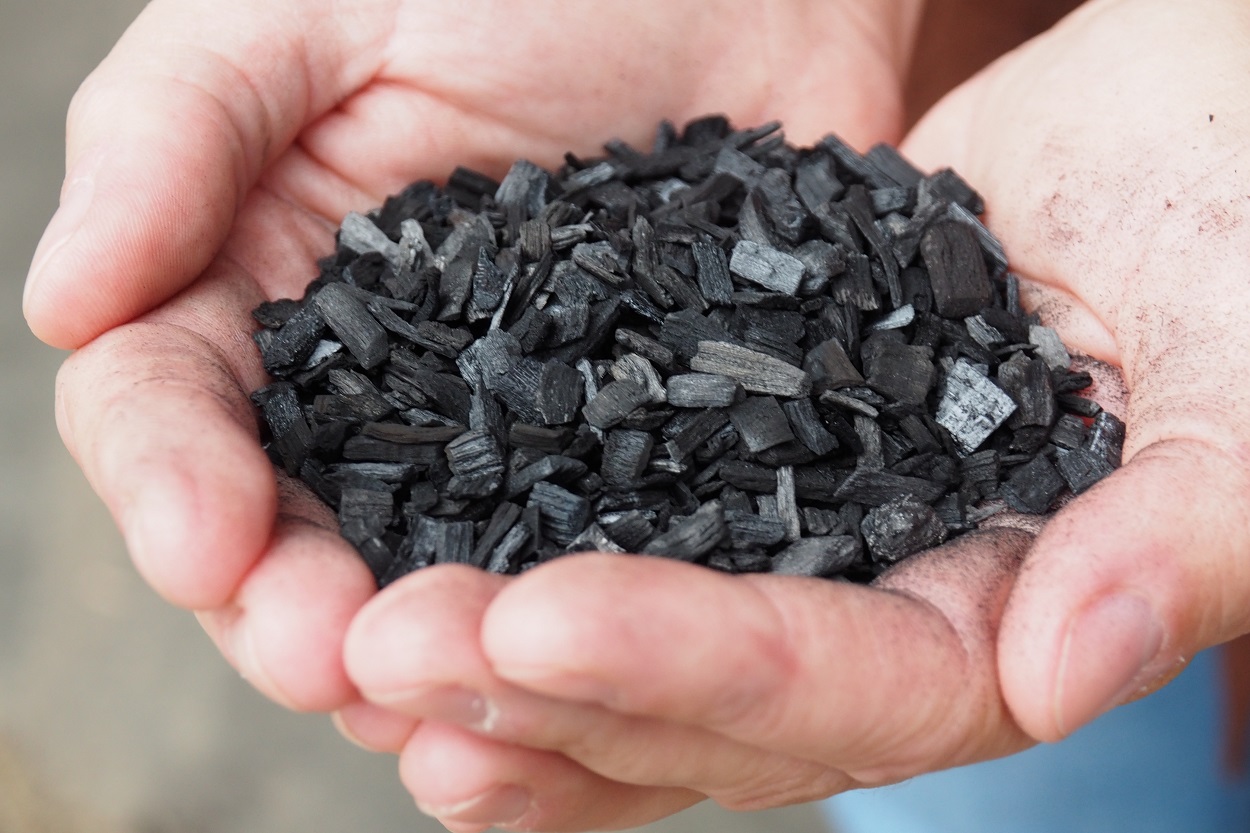 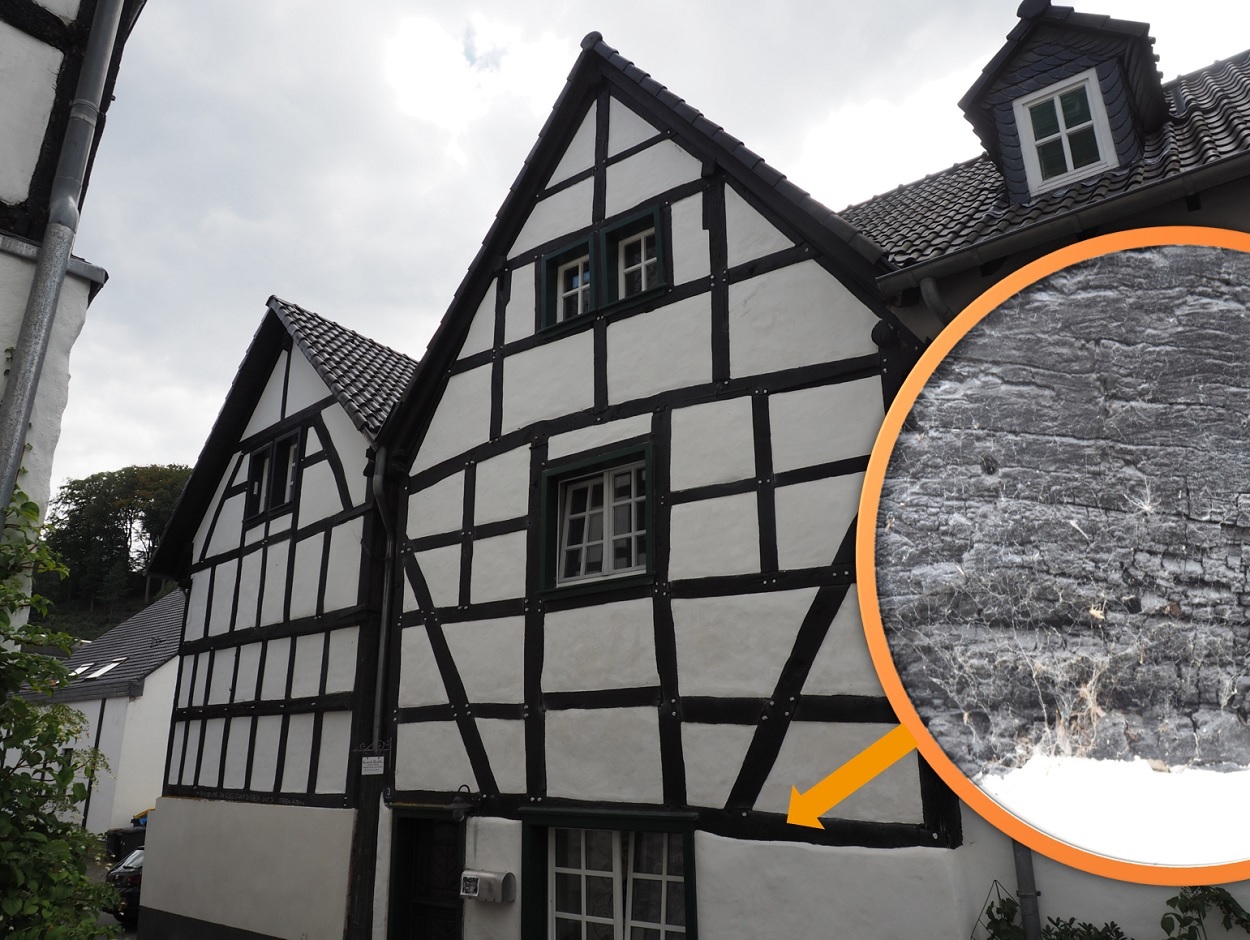 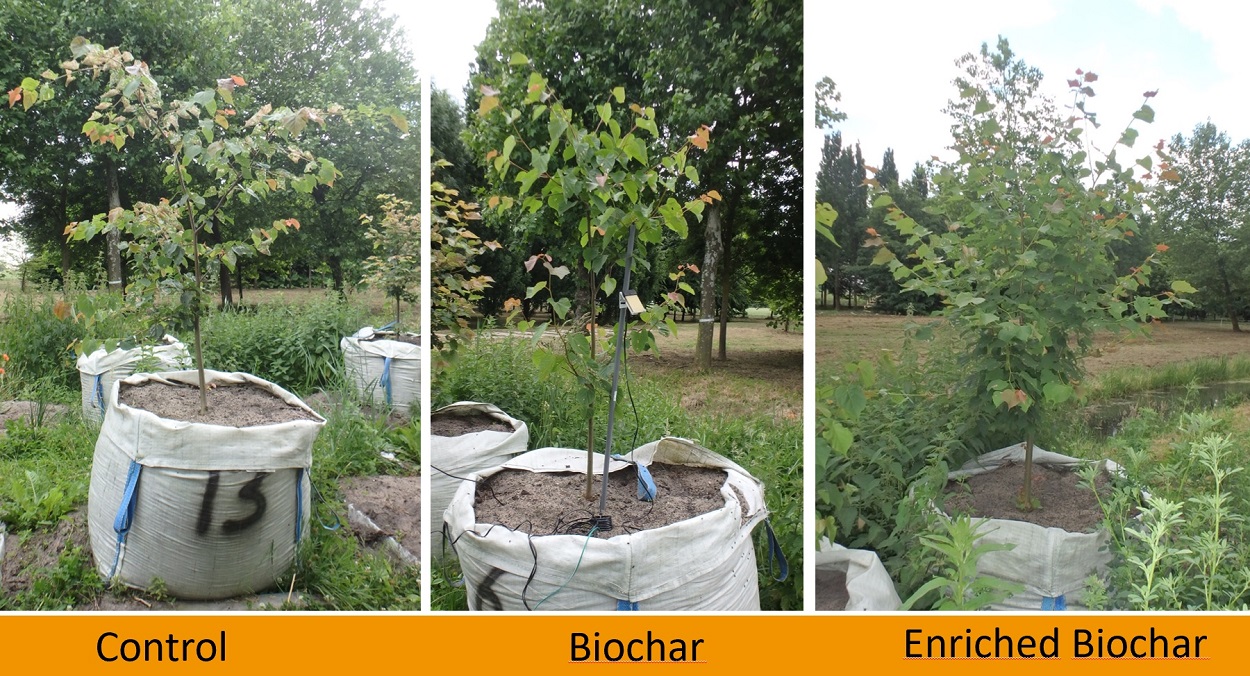 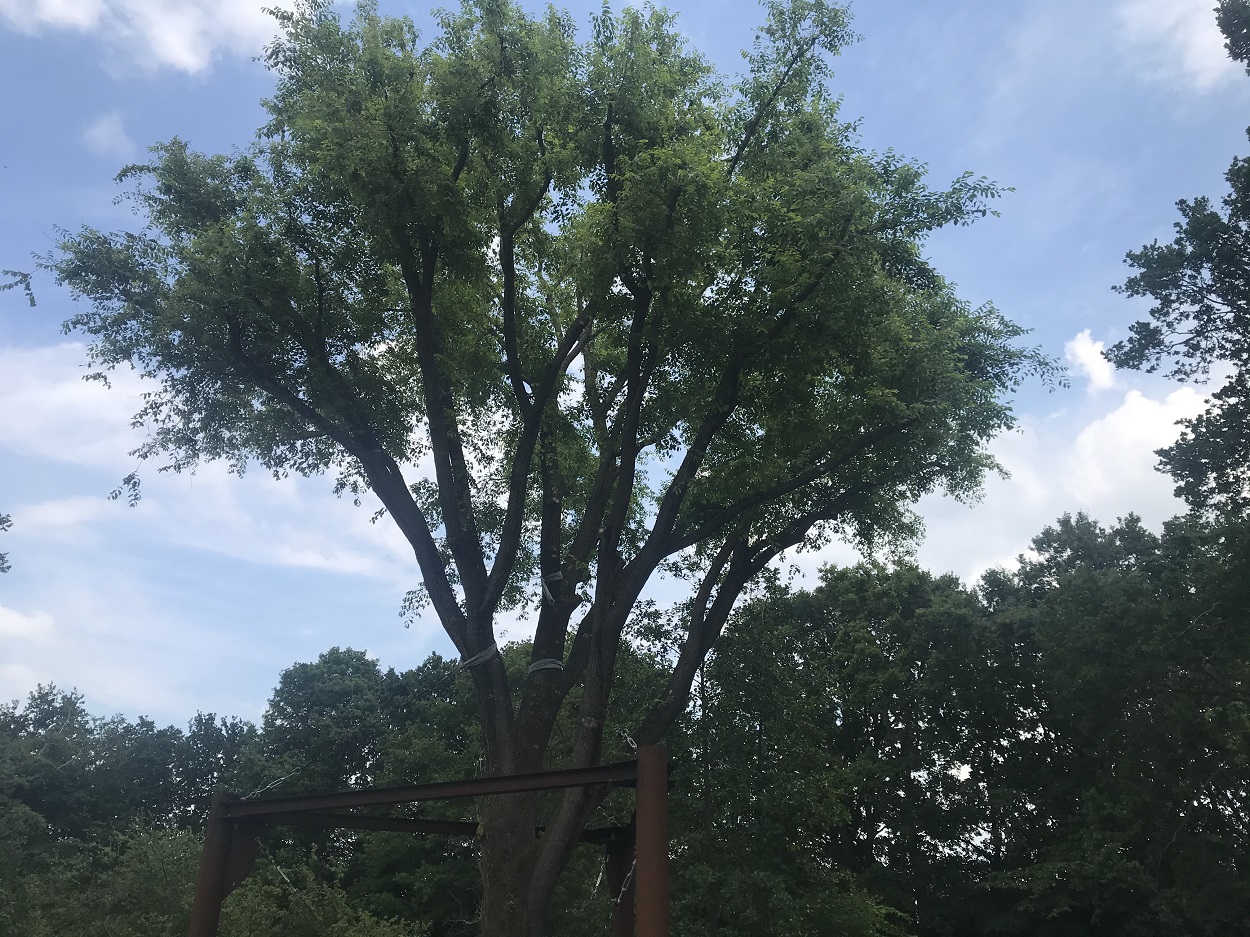 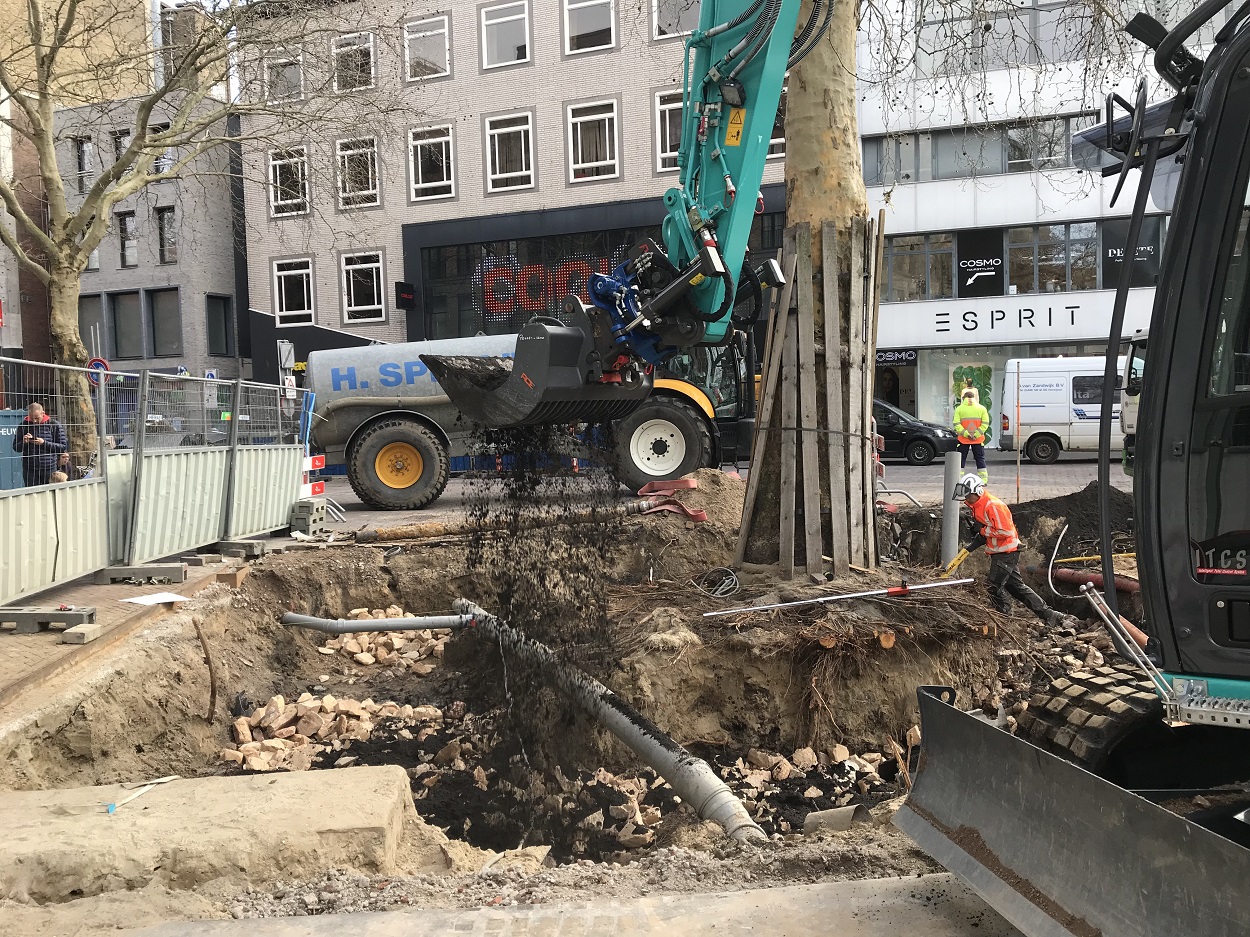