Delayed incompatibility in trees is still an ongoing issue

Grafting is not only an essential technique in the fruit-tree cultivation, it is also widely used on urban tree landscaping. The art of fusing two species and watch them grow as a single one has long been considered rather mysterious and secretive. We literally reap the benefits of the grafting, but things sometimes go wrong when after years it turns out that the two spouses don't fit well together. Delayed incompatibility is as old as grafting itself but still an ongoing issue.

Grafted trees are trees that are propagated through a grafting process. Two components are needed for grafting a tree: a rootstock and a graft. The rootstock serves for the rooting of the tree, and it is obtained by selecting a seedling or cutting from a suitable species. The graft serves for the aboveground part of the tree, and therefore it is cut from a mother tree with the desired properties.  These two components are connected to each other in an early life-stage. As a result, both of them grow together into a grafted tree. These are addressed as a cultivars of its precursors. In scientific writing, the third part of the name refers to a graft; it starts with a capital letter, surrounded by single quotation marks and it is not  written in italics. Grafting is a common cloning technique that tree nurseries have been using for hundreds of years.  This has been the case even before cloning started to gain popularity within animal sciences, especially with the sheep Dolly, fortunately this does not yet happen with humans. In that case I would know a former American president who could not get enough of himself.

In most situations the fusion between the two components goes well. It is normally done within the same genus or even species. For instance, we may think of a graft from a red-leaved beech combined with a rootstock from a green-leaved beech. Or a graft from a weeping ash combined with a rootstock from a common ash. In some occasions it is even done using individuals within the same family: a graft from the Pyrus genus on a rootstock from the Crataegus genus (Rosaceae family), or a graft from the Parrotia genus on a rootsctock ftom the Hamamelis genus (Hamamelidaceae family). The end goal is to assist the propagation of targeted trees that otherwise may struggle to grow on their own rootstock.

Within fruit-tree cultivation, other interests still play a role in the grafting. For example, rootstocks are used to control the development of flowers and thus production of fruit. A too strong rootstock generates too much growth on the graft and therefore produces few fruits, and the other way around, a slow growing rootstock results in the graft blooming too much and thereby becoming exhausted in the short term. In addition, disease tolerance plays an important role in graft-rootstock combinations.

I regularly make comparisons between people and trees. This can easily be extended to grafted trees. For instance, some marriages end up quickly especially if you get married blindly in a TV program such as Married at First Sight and others go down the pipe over the years. This can also be seen at the tree nurseries. Endless efforts are made to create new rootstock-graft combinations, but these may ultimately not accept each other. This is what we call incompatibility. We see a number of well-known predictable 'doomed marriages' in advance. The combination of an Hungarian oak, Quercus frainetto, on a common oak, or the use of a Mountain Elm, Ulmus glabra, as a rootstock are good examples of known delayed incompatibility. This can be caused because the species might not be suitable to connect with each other but can also due to dissimilarity caused by variations within the seedlings. In that case, the tree initially grows well and might only show signs of rejection after decades.

A tree manager is responsible for checking the health status and possible weakening of ornamental trees, as this may lead to unsafe situations. Many risks are easily foreseen if looked through the right lens. Understanding and translating the body language of trees remains here crucial. But of course, without crossing the limits of commonsense. In fact, I have indicated before that there is a tendency to tip over to into a “tree over-security madness” witch-hunting. What I want to emphasize is that there are certain flaws that do really require our full attention. This is the case of the deferred incompatibility. It is important to recognize the symptoms early on because it may not only lead to the death of the grafted tree but also may cause spontaneous windthrow. Basically the connection between the graft and the rootstock fails. Among Dutch Treeworkers, this phenomenon is sometimes referred as “pencil disease”.

Regularly both individual trees and complete tree structures are cut down due to delayed incompatibility. I am mostly familiar with several elm species and lately with a rising number of silver limes. Silver limes are highly variable at the seedling stage and designers often opt for targeted cultivars such as Tilia tomentosa 'Szeleste'. In the past years various silver lime cultivars have become popular, creating some kind of “hype”,  escalating their demand and leading to tree stability problems. Still, a tree with a delayed incompatibility is not to be trusted, as it is unable to survive in the long term and can pose an increased security risk.

A number of phenomena are known to indicate delayed incompatibility.  First of all, a distinction must be made between trees with a visible root initiation and a non-visible root initiation. If a tree shows at least five structural roots scattered around  the trunk base, then the stability of the tree is normally sufficient enough. However, if the structural rooting is concentrated in a given direction around the trunk base, then the stability of the tree might be at stake. When the trunk-root connection is not visible, the trunk base is often significantly cylindrical. This can be caused by a raise of the ground level, planting the tree too deep, or by a lack of a stable root system. The root base must be released for checking the source of the problem, which is best done with an Airspade. With delayed incompatibility, an underdeveloped main rooting structure is observable, which might be accompanied by girdling roots and seam and cork layer formation on the grafting surface. The remaining roots are often unable to take over the stability function when the rootstock is rejected.

Other signs of deferred incompatibility is a line due to a cork layer formation, a declining condition of the tree, often accompanied by an early autumn discoloration and an excessive shoot formation from both the rootstock and the graft. Rib formation and differences in vigor between graft and rootstock can take place as thickening and narrowing of both parts. These signs raise the alarm for further investigation. This is often done by means of a pulling test, which provides reliable insights into the stability of the tree. Results from a pulling test are specially handy when visual characteristics do not indicate an outcome with sufficient certainty.  Coupled with historical knowledge and data analysis, Terra Nostra  uses such technique to carry on research about delayed incompatibility. This way plans and tools that lead to safe tree management and responsible tree conservation can be developed.

Prevention is better than cure. A good way to avoid delayed incompatibility is to directly plant seedlings or cuttings on their own roots. However, in the case of seedlings this might be counterproductive, as specific characteristics may be lost in the process. This is the case with apple- and pear trees, but also with the many elm clones crossed as consequence of the Dutch elm disease. On the other side, tree species such as the Hungarian oak, various elm species and the Persian ironwood (Parrotia) can easily be grown on its own roots. Therefore, it’s always good to understand the potential growth of the different species before purchasing any tree, with guidelines such as the list of the “Graft and Rootstock problems” developed by the Dutch Tree Nursery Council.

Grafting location showing line and root formation from the graft 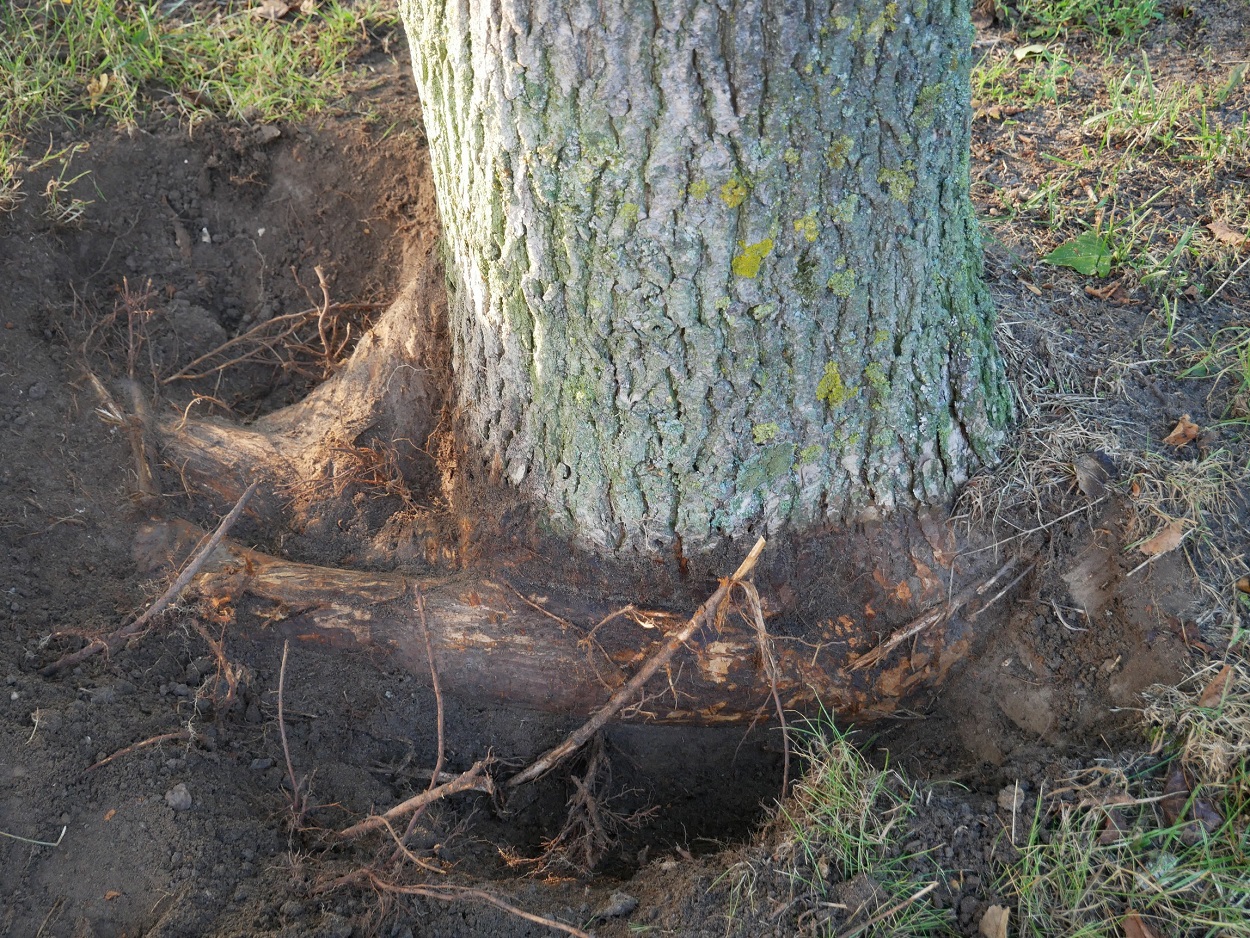 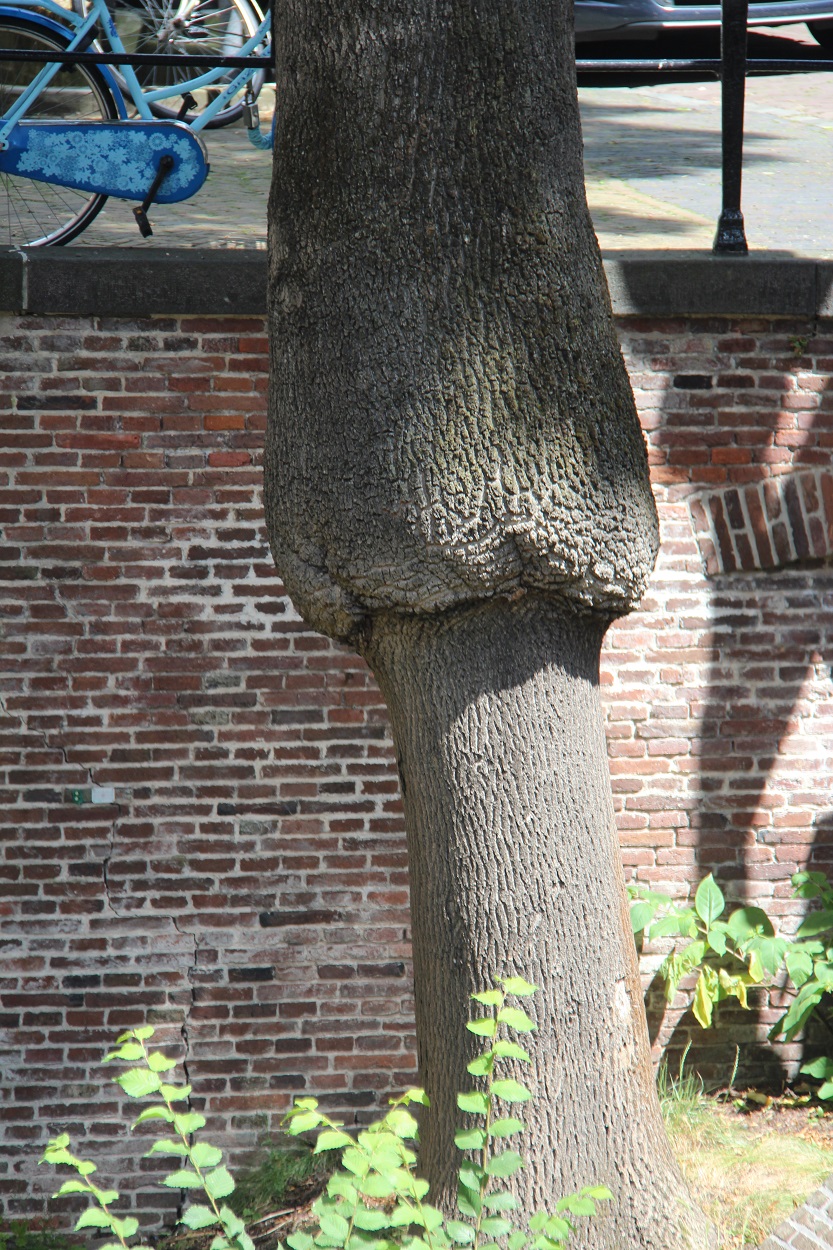 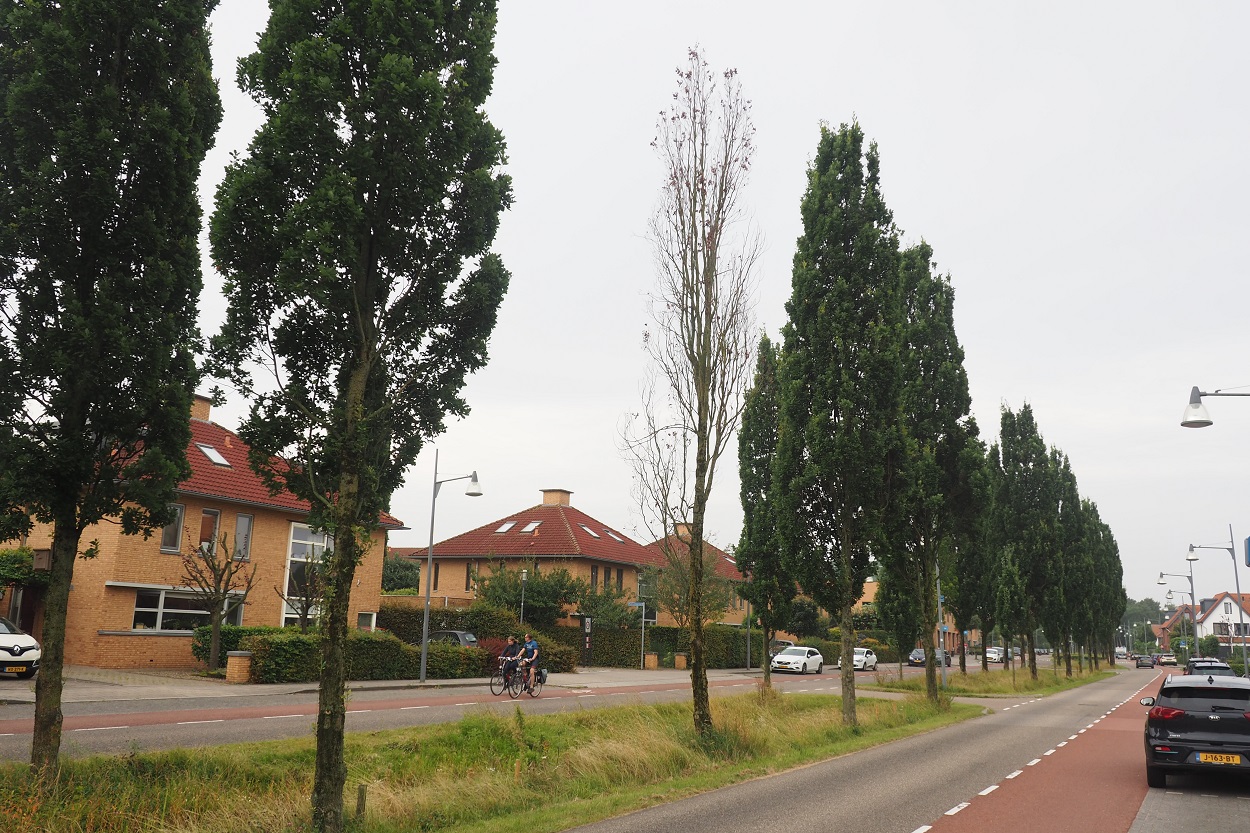 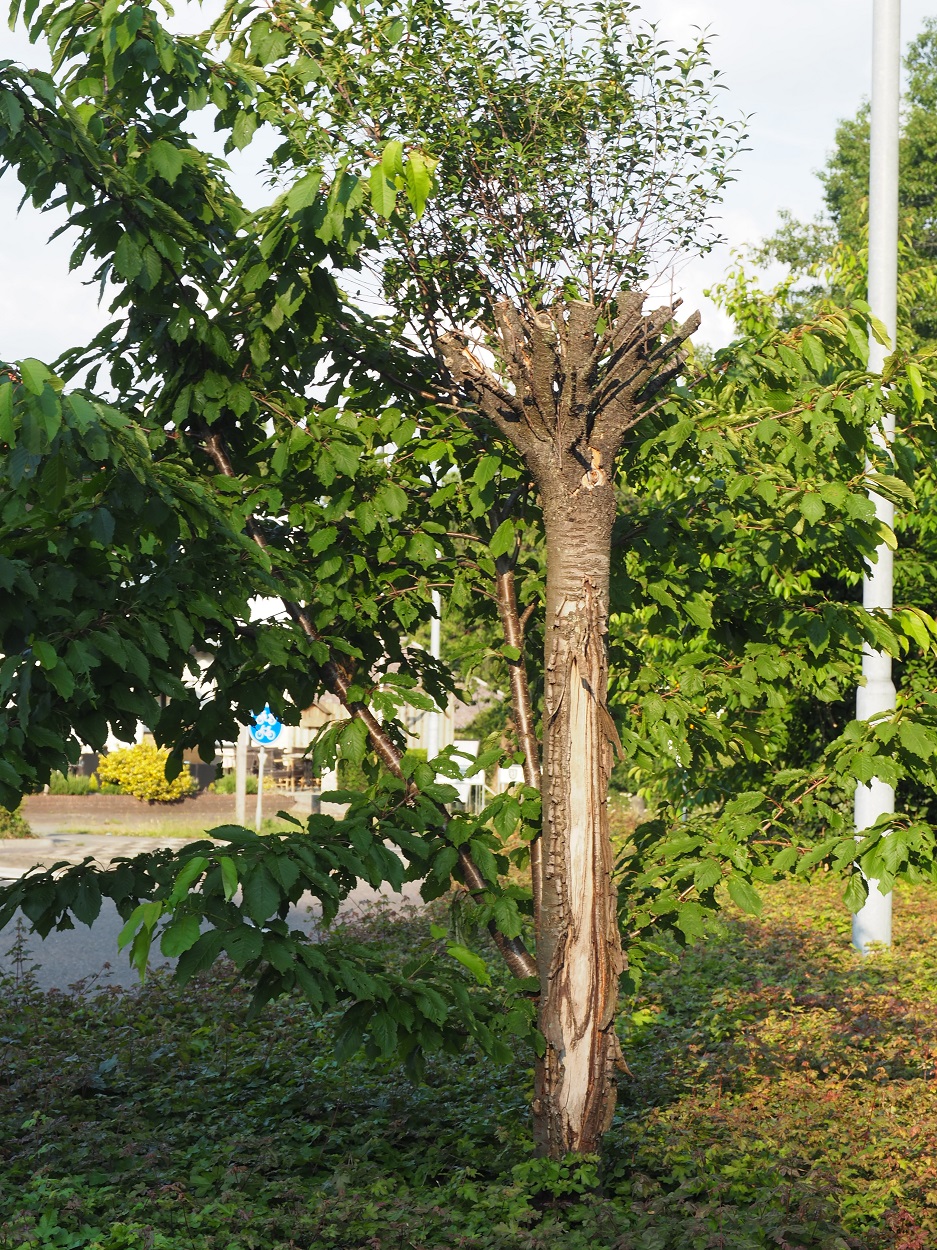